By their nature, submarine movies lend themselves to easy criticism — in terms of wordplay that is. Analogies such as “the performances were so painfully lacking that they ‘sunk’ the entire film” or “why watch this film when it should be isolated and submerged beneath two miles of ocean?” could easily take form. Luckily enough for Kevin Macdonald, director of the new release Black Sea, these asinine stabs at wit do not have to be put to use (although others may find themselves of worth).

Instead, Macdonald, who also directed “The Last King of Scotland,” has crafted an intelligent, lively film that’s both breakneck and (moderately) sentimental. Its subtext is feeble and the leading character is transparent, but Black Sea is still a helluva’ ride. From the get-go viewers are strapped in for thrills, unlike the onscreen characters who find themselves clanking their heads on almost every piece of metal on the old Soviet submarine they travel aboard.

The film begins earnestly enough with the firing of Captain Robinson (Jude Law, “Side Effects”) from his marine salvaging company. Robinson, also a former naval officer, is bitter about the termination, so much so that he also becomes vengeful. It’s been years since he’s connected with his ex-wife and distant son and so now he has nothing to lose. When he is tipped off about the possible bounty inside a sunken German U-boat in the Black Sea (near to Crimea), he takes action.

Acquiring funding from a shady English character, through that man’s banker named Daniels (Scoot McNairy, “Argo”), Robinson sets out with his friend Blackie (Konstantin Khabenskiy, “Tinker Tailor Soldier Spy”) and a ragtag crew of Brits and Russians to covertly rescue the treasure — millions of pounds worth of gold. It is rumored that the specie was a demand of Hitler’s, unto Josef Stalin, in 1941, but never made it back to Germany. Robinson’s makeshift crew — which also includes young Tobin (Bobby Schofield) and Fraser (Ben Mendelsohn, “Exodus: Gods and Kings”) — soon board a decrepit rust-bucket that apparently qualifies as a seaworthy submarine, with hopes high in search of the bounty. But when Robinson decides that the riches, if found, will be split evenly among the crew, the culturally divided men grow agitated, putting the salvage mission into jeopardy as they sink deeper into the depths, ever closer to the gold-laden U-boat.

Performance wise, Jude Law deserves his customary praise because it is remarkable to see just how unwavering he can make his characters. However, in a more surprising triumph, Black Sea is practically hoisted upon the shoulders of Ben Mendelsohn. Coming off a mostly adequate performance in the mediocre film, “Exodus: Gods and Kings,” he strongly delivers here. It is his crazed look (that makes for two well-framed close-up), and brash, nonconformist attitude which powers this film’s turbines and to which all conflicts circulate.

Aesthetically, Black Sea is dark, dreary and claustrophobic enough to admirably tell its tale. One sequence on the seabed where Fraser and two divers approach a protruding “mound” is particularly effective. The camerawork and effects are so stunning during it that I too felt my lungs compress a bit from the many pounds of pressure straining the dive suits. In an aural sense, the film is serviceable — the fuzzy radio calls, sounds of creaking metal, tightened gauges and bursting pipes — all add realistic depth to the proceedings. Together, they make for a seamless cinematic effort; allowing the audience to submerge into the rooted conflict (and enjoy Jude Law’s manufactured Scottish brogue).

Thematically, is where the film takes on a bit of water (can’t escape those puns). Macdonald and screenwriter Dennis Kelly try to advertise a fairly weathered central message, one that sort of resonates with the “Occupy Wall Street” concept of “sticking it to the man.” Captain Robinson and his company of misfits are out to undermine “them” — the higher-ups who cast him and his sailor buddies out onto the street. While this message is well-intentioned and relatively powerful, it comes across as a bit labored and overt. Other ideals like those of salvation, fatherhood and altruism come shining through too, but they’re mostly stressed as “what not to do.” Nonetheless, there are a handful of characters that grow immensely in the 115 minute running time.

Ultimately, as with “The Last King of Scotland,” Macdonald sheds light on our perception of power and how easily corruptible our fellow man can be, though this time not in the political sense. Within the tension-filled confines of a rickety old submarine, Black Sea is a crash course — literally — in defining the utility of the bourgeoisie, with the lure of the dark, lonely, temperamental sea as its backdrop. With such amoral compasses, it’s no doubt there are rough seas ahead . . . 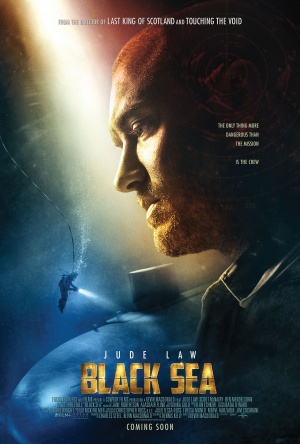