Ron Howard’s Solo: A Star Wars Story has all the right intentions — meteoric pacing, a clear narrative arc, an extension of the space opera genre, a talented ensemble and a robust visual effects budget. What’s more, it boasts one of the most likable characters in modern cinematic history: Han Solo (now played by Alden Ehrenreich, “Rules Don’t Apply”).

Overall, the casting of Solo: A Star Wars Story is superb, including Han and extending right down the cast list. While it certainly allows for humor (as Han’s cynical personality calls for nothing less), it’s likely far from the “Guardians of the Galaxy”-type project initial directors Phil Lord and Christopher Miller had in mind in the early stages of production. Nevertheless, Howard masterfully weaves together a weighty script, crucial timelines and all the visual flare one might expect with the Millennium Falcon in flight. Still, it doesn’t add to the “Star Wars” canon too extensively, whereas the Battle of Scarif in “Rogue One: A Star Wars Story” cleverly teased the anti-imperial sentiment to come, while incorporating the likes of Grand Moff Tarkin (digitally reanimated Peter Cushing), Darth Vader (Spencer Wilding/James Earl Jones), and even the Force.

Revisiting “Rogue One: A Star Wars Story,” the first “Star Wars” anthology film — with one in the works for Obi-Wan Kenobi? — there are key takeaways that inform the bedrock of George Lucas’ original series. Howard’s Solo: A Star Wars Story certainly has the correct Galaxy vibe, but it functions more as a high-stakes Western film (a confirmed early Lucas influence) than a canonical space opera. Han and his mentor, Tobias Beckett (Woody Harrelson, “War for the Planet of the Apes”), even flash the requisite gunslinging tricks. (Han shot first).

Han’s origin story begins as he and friend/love interest Qi’ra (Emilia Clarke, “Me Before You”) scrounge to get by on the shipbuilding planet of Corellia. They’re essentially indentured servants to the bug-like gang leader Lady Proxima (voiced by Linda Hunt, “NCIS: Los Angeles” TV series). The two attempt to flee the planet using a small sample of stolen hyperfuel (coaxium), but only Han emerges unscathed. Penniless, his only desire is to return to Corellia to retrieve Qi’ra. He enlists in the Imperial Navy as a flight cadet but is ultimately placed into the throes of (trench) warfare.

On the battlefield, he meets Beckett and company, a lawless group of hired hands sent to steal supplies and ultimately coaxium for the ruthless leader of the Crimson Dawn criminal syndicate, Dryden Vos (Paul Bettany, “Avengers: Infinity War”). Han and a new Wookiee pal Chewbacca (Joonas Suotamo, “Star Wars: The Last Jedi”) manage to squeeze their way into Beckett’s gang. Han embraces the “criminal” lifestyle, despite others telling him he was born to effect (positive) change. When all else fails and Beckett is forced to embark on a dangerous coaxium-seeking mission for Vos, Han masters his sly rhetoric, flying skills and, ultimately, his unwavering cynicism. Will Han and Beckett manage to siphon coaxium from the mining planet Kessel? (Remember the good ol’ Kessel Run made in 12 parsecs? Yep, that’s the one). Will they also slip past Vos’ overlord, and a group of marauders on their tail? And, better yet, what ship will they adventure in? Something says Lando Calrissian (Donald Glover, “The Martian”) has a thing or two to say about that.

If there’s another component of Solo: A Star Wars Story to praise, it’s the visual effects. Sure, there was an exorbitant budget behind this aesthetic treat, but Howard and cinematographer Bradford Young weave the CGI and narrative together with zeal and precision. Since the movie does not set out to be one of the biblical “episodes,” it essentially had creative license to improvise or widen the extended universe (EU) where needed. There’s one such instance where it does the latter, using a cameo to resurrect a semi-prominent figure from Lucas’ prequel series. Where this plot thread goes, only Lucasfilm knows.

It’s nice to see screenwriters Jonathan and Lawrence Kasdan also leaning on the EU to drive plot lines and funnel some of the animated series’ most promising elements into the cinematic world. What’s more, their script highlights the many influences Lucas used to build his massively successful Galaxy. Outside of the Western, it also includes high-concept, high-fantasy world-building, history (the Empire and the fascists) and bits and pieces of the action-comedy, chase films and coming-of-age tales. This amalgamation of different influences, genres, characters and settings makes “Star Wars” one of the best universes ever brought to the silver screen. It’s no wonder Disney and Lucasfilm have plotted additional installments, and why A-list actors continue to come aboard to fuse their talents with Lucas’ original vision.

To be clear, Solo: A Star Wars Story is not the most awe-inspiring “Star Wars” film ever made, but audiences should (and likely will) embrace it as a visual treat and a bridge to additional anthology films. One incorporating “Rogue One: A Star Wars Story” arcs with this film’s characters and ultimately Obi-Wan Kenobi will surely be a film for the ages. Let’s hope Lucasfilm considers this — and quick.

Han Solo once said, “You know, sometimes I amaze even myself.” That sentiment carries over with his latest outing. 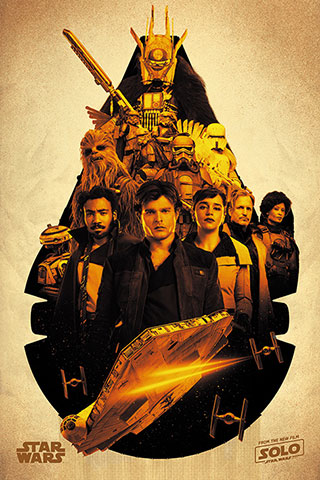