The desire to transcend the environment in which you were raised and choose your own direction in life is central to Disobedience, a clash between religious orthodoxy and the desire for sexual freedom. Adapted from Naomi Alderman’s novel of the same name, it is the first English-language effort for Chilean director Sebastian Lelio whose critically acclaimed, “A Fantastic Woman,” won the Oscar for Best Foreign Language film in 2018. Co-written by Lelio and Rebecca Lenkiewicz (“Ida”), Disobedience stars Rachel Weisz (“My Cousin Rachel”) as Ronit, the daughter of Rav Kruschka (Anton Lesser, “Allied”), an Orthodox Jewish rabbi who suddenly collapses and dies after delivering a sermon about mankind’s unique ability to be the chooser.

Her father’s death prompts Ronit to return from New York where she is forced to confront the London community that she left many years ago after an altercation with her father over her sexuality and fears that she would be persuaded to get married against her will. The film opens in New York with Ronit taking photos of a man tattooed from head to foot, ice skating in a rink by herself with a glassy look in her eyes, and engaging in sex with a stranger in a public bathroom. When she returns to England for her father’s funeral, she is greeted with obvious distance by the insular community who has not forgotten the circumstances that caused her to leave, though there are no overt expressions of intolerance.

Nonetheless, Ronit is greeted warmly by her cousin Dovid Kuperman (Alessandro Nivola, “You Were Never Really Here”), a student of her father, who invites her to stay in his house. Tension soon surfaces, however, when Ronit is introduced to Dovid’s wife Esti (Rachel McAdams, “Game Night”), her former lover, who married at the suggestion of Ronit’s father but whose pretense to be something she is not is deeply problematic. We do not discover the connection between the two women at first, but it is easy to see that Ronit is not the only one who has brought baggage to the house. Attention is all on Ronit at a dinner party where she challenges assertions that a young woman should be married and have children.

Unfortunately, only Dovid and her aunt Fruma (Bernice Stegers, “Suite Française”) show any understanding. Esti is quiet and withdrawn, but emotions hidden beneath the surface seem ready to be unleashed. This in fact occurs when Esti accompanies Ronit to her father’s house after Ronit learns that the house has been left to the synagogue rather than to her as part of her inheritance. Just happening to turn on an old radio which just happens to be there, the song they hear, “Love Song” by The Cure, contains such unsubtle lyrics as “Whenever I’m alone with you / You make me feel like I am home again” and “However far away / I will always love you.”

Predictably, the song triggers repressed feelings and they kiss and embrace for the first time in many years. When Dovid discovers their relationship, after openly expressing his anger, he is forced to address the conflict between his love for Esti and the orthodox teachings about homosexuality. Related to that is the question of free will and choice that the Rav raised in the talk before he died and one that Dovid forcefully addresses at a gathering. Ultimately every character in the film has hard choices to make, perhaps because they neglected to make them years ago and settled for what was convenient. Yet, in the recognition and ownership of the choice that must now be made, the characters true freedom of action is recognized and celebrated.

Disobedience is a challenging film that reaches us on an intellectual level, but ultimately fails to stir us emotionally. While there are moments of excitement and spark, a lovely score by Matthew Herbert, and the spiritual power of Hebrew chants and songs hallowing the name of God, we never really get to know the characters who are more like symbols than actual human beings. Even considering its ultimate heartbreak, last year’s “Call Me by Your Name,” a film that contained a similar relationship, seemed to balance its sense of loss with humor, vitality, and passion. Disobedience, on the other hand, is too full of “significance,” and is enveloped in a dirge-like shroud as if joy was forbidden by religious decree.

'Movie Review: Disobedience (2017)' has no comments 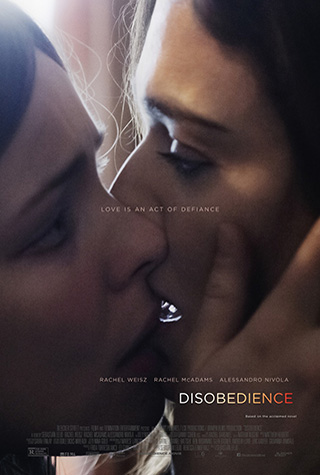