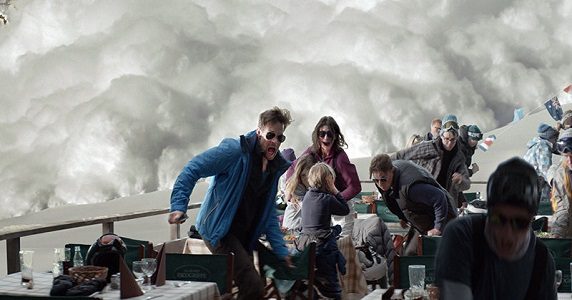 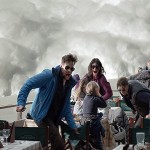 “Not” running for safety.

In a moment of weakness, a middle-aged father of two tries to save himself rather than his family in a dangerous situation, an action that has deep ramifications for their relationship. Winner of the Jury Prize in the Un Certain Regard competition in Cannes in 2014 and Sweden’s official entry into the Oscar sweepstakes for Best Foreign Film, Ruben Östlund’s Force Majeure (original title “Turist”), his fourth feature and his first since “Play” in 2011, is a biting satire that has sharp teeth. Filmed at an actual resort, Les Arcs, in France, a seemingly happy and well-adjusted family that includes Tomas (Johannes Kuhnke), Ebba (Lisa Loven Kongsli), and their young children Harry (Vincent Wettergren) and Vera (Clara Wettergren), go on vacation at an expensive ski resort in the French Alps.

Ebba tells a friend that their purpose is to bring the family closer together since Tomas has been very busy at work. All seems well as they spend the first day hitting the slopes and taking pictures, but the idealized picture-postcard scene begins to unravel on the second day. Taking a break from skiing, the family has lunch at an outdoor restaurant with gorgeous mountain scenery in the background. When they suddenly witness a controlled avalanche, the force of the blowing snow seems to threaten everyone in the café. Instinctively, Ebba reaches out to protect her children, but Tomas, in a moment of panic, grabs his cell phone and runs for cover. His spur of the moment decision sends a message to the Ebba and the children, that in times of emergency, they could be abandoned.

No matter how it is rationalized away, the element of trust that cemented their relationship is broken beyond repair. To compound the problem, both seek to maintain control by suppressing and denying their feelings until they are no longer able to. In front of a couple of Norwegian friends, the divorced Mats (Kristofer Hivju), and his 20-year-old girlfriend, Fanny (Fanni Metelius), who come for a visit and are drawn into the argument, Tomas resorts to rationalization and denial. Absurdly, when they look at footage of the event captured by his cell phone, all Tomas can say is, “I agree it looks like I’m running.” Ebba’s neat little world is also threatened by a friend telling her that she and her husband maintain an open relationship, even after having two children and it all works fine.

Unwilling or unable to acknowledge his action, Tomas beats himself up with guilt and engages in a prolonged crying jag which Östlund characterizes as the moment when, “Crying stops to be poetic and starts to be something that is just miserable — deeper and deeper — but doesn’t create any sympathy, or empathy.” Though wryly observant rather than intimate and it may go on a bit too long, Force Majeure is smartly written, beautifully photographed, and darkly comic. Willing to confront deeply-rooted gender stereotypes and challenge us to look at our own life and see how we might have acted in a similar situation, it is a force of nature, both literally and figuratively. 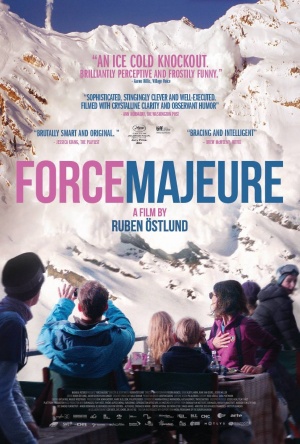