It is a bold filmmaker who trusts film as film and allows the medium to communicate without recourse to exposition and dialogue. Such a filmmaker is Lynne Ramsey (“We Need to Talk About Kevin”), whose latest offering, You Were Never Really Here, is a brilliantly brutal assembly of image and sound that never displays any compromise of vision or meaning. Backstory is hinted at with abrupt cuts while match cuts link scenes through pure formal arrangement. A constant score by Jonny Greenwood merges with a track of sound effects that, combined, pulse, throb and crash against the viewer’s consciousness, immersing one fully in the grim and frequently depraved world of the film.

At the center of this world is Joe, played by a bulked up Joaquin Phoenix (“Inherent Vice”) whose brooding, bearlike presence is physically reminiscent of Oscar Isaac’s Nathan in “Ex Machina.” Psychologically, however, Joe is a descendant of Travis Bickle from “Taxi Driver”: A man haunted by traumatic memories of combat, generally disgusted by the world and doing his bit to make a tiny part of it better. Working through an old friend/crime boss John McCleary (John Doman, “Blue Valentine”), Joe rescues underage girls kidnapped for the sexual pleasure of wealthy men. When a senator hires Joe to find his daughter, with the added requirement that he hurt the people responsible, Joe sets out to use his particular set of skills for capture, interrogation and execution as part of a rescue. Joe’s brutality is combined with an innocence that partially explains his commitment and his affinity with children. However, despite Joe’s evident talent for grim operations in the underworld, he rapidly finds the forces against him to be larger than he expected, including corrupt cops and hired killers who threaten the few connections that he has to humanity.

The plot of You Were Never Really Here is fairly slender: Joe is hired to find Nina Votto (Ekaterina Samsonov, “Wonderstruck”), hurts people, encounters opposition, spends some time with his mother (Judith Roberts, “Death Sentence”). Thematically, it touches on trauma and memory, nobility and vigilante/hitman justice. Cinematically, it is an incredible experience that demands to be seen, as in-depth description fails to do it justice and may dilute its impact.

Nonetheless, I’ll do my best.

The violence is at times stomach churning, as blood spatters across faces and Joe’s preferred choice of weapon — a hammer — collides unflinchingly with heads. Interestingly, there is more emphasis upon the aftermath of violence, such as Joe cleaning himself and his hammer off (not a euphemism). There is no doubt as to what took place, but as is often the case, what we do not see can be more disturbing than what we do. There are also weirdly beautiful moments, such as when a fight between two men is captured in a long take of a mirror that reflects the combatants while also aesthetizing the struggle. Similarly, a home invasion is largely rendered through CCTV surveillance footage, which doubly distances the viewer both by creating a screen within the screen and also fragmenting the sequence so that we do not see the entirety of the acts. At other points, long traveling shots follow Joe through alleyways and corridors, and a sequence in a lake passes into transcendent territory.

Throughout You Were Never Really Here, Ramsey never spoon-feeds the viewer, demanding our engagement and interpretation of her visceral and at times disturbing images. Just as she is a bold filmmaker, so the viewer must be bold to take this journey with Joe, a largely impenetrable cipher who is hard to sympathize with. But make the journey with him, and you will not soon forget that you were really there. 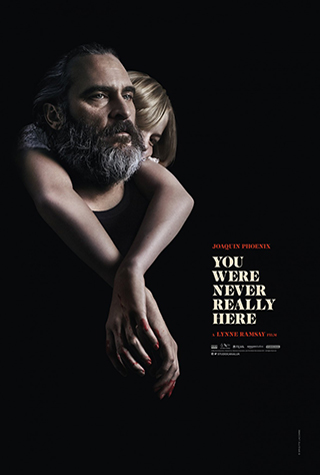