“Gantz” is a 37-volume manga series written and illustrated by Hiroya Oku from 2000-2013, whose worldwide distribution has sold an excess of over 20 million copies. Hallmarked by its sexual overtones and sadistically gory aesthetic in tandem with deep sociological, psychological and anthropological themes dissecting morality, it is considered one of the most controversial seinen manga ever made. No stranger to adaptation, the story received a 26-episode anime series in 2004 by Studio Gonzo, and a trio of live-action movies in 2011 by Digital Frontier (who also is the production company for this film). Yet even without any prior knowledge of the manga, the latest incarnation, Gantz: O, is a tautly wound and nail-biting horror action film riddled with corpses and bullet-time stunts.

For those who are familiar with the source’s various arcs, however, the work can be underwhelming.

It follows Masaru Kato, an ordinary 17-year-old teen, who, on his way home from work for his brother’s birthday is brutally murdered in a subway station by a knife-wielding psycho. However, instead of dying, he wakes up to find himself in a strange empty room accompanied by a few other people and a large spherical computer named Gantz. After his initial freakout at a man getting his head blown off, he is forced with the others to fight in a timed game against a sizable hoard of hostile aliens in Osaka. If Kato scores 100 points, he’s given a choice to leave the game, but if he dies this time, it’s for keeps.

Foremost, the animation and production design of Gantz: O is pretty amazing. There has been a lot of debate over the past few years about the ever-increasing volume of 3DCG anime, with most considered overly janky and awkward. This could not be further from the case in this instance. Where the original anime series utilized 3D animation to give things an off-kilter and warped appearance (see my full video review), here it is stunningly realistic; at times I was questioning whether or not I was watching live-action footage. The intense detail paid to the lighting design, character model animation, the environments actually involved in the action, and a wide array of cinematographic manipulation is something that I could expect from master filmmakers like Takashi Miike or Kinji Fukasaku, but not from the likes of directors Yasushi Kawamura (whose career has been primarily in CGI work for okay video games) and Keiichi Saitô.

The action sequences engineered by Kensuke Sonomura are gripping, frantic and possess sublime kinetic atmosphere. Real weight is given to each footfall and gun blast, so the result of each action feels justified. There’s even a “Pacific Rim” styled giant robot vs. kaiju fight in the middle of the city that’s just damn awesome.

The highly expressive human and alien designs are almost exactly carbon copied from the manga, though this is where I start to wane. The aliens are indeed unique (some unnervingly so), and are overall effective. However, they feel more as if they’re wacky hybrid rejects of “Dark Crystal” and “Silent Hill” than alien lifeforms, and some come across as just plain goofy. There is a brief romance aspect that is barely brought up, and therefore it contributes nothing to the film besides positioning another gruesome death to have as much hollow emotional shock as possible. Most notably though, the critiques of society and culture that is so resonant in the manga and anime series is more or less abandoned in Tsutomu Kuroiwa’s screenplay. This results in mostly forgettable one-note personalities, despite the excellent voice work by the original Japanese cast. Though the fights seem significant in the heat of the moment, the stakes ultimately never feel all that dire.

As a large fan of the source material and original anime, I do understand how I can be biased against a film like this, even considering how much extra time the other works had in fleshing out their themes as opposed to a mere 96-minute movie. As a stand-alone piece, it’s a fantastic example of action filmmaking that should be on the list of any fan of the genre. As an adaptation, Gantz: O is a middling experience that misses the trees for the forest. 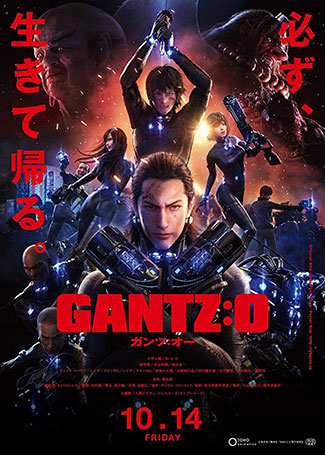