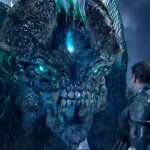 A face only a mother could love.

Laden with clamorous battle scenes, sweeping visual effects and a fairly conventional storyline, Pacific Rim delivers in its appeal but lingers dangerously close to the entrance to the vault of forgettable, inconsequential summer films.

That’s mostly due to the fact this — in the most simplistic of analogies — “Godzilla” meets “Transformers” movie suffers from shoddy acting, and a story that continually falters in between massively (but competently) constructed CGI battle scenes.

Set in the 2020s, the world is rancorously coming to an end as giant monsters, called “Kaijus” are filtering through a portal on the floor of the Pacific Ocean formed in a crevasse after tectonic plate movement. And since these creatures aren’t of the friendly persuasion, after emerging from this hole, they wreak havoc upon Earth’s major cities. Utilizing all resources to counteract these attacks, humans develop the “Jaeger” program, comprised of metallic fighting machines that rival the monsters in size. Two pilots, attuned to each other’s minds through a “drift,” or brain-share, must man these robotic killing machines. Why two? Well, attempts were made in the past to man them solo, but the load was too overwhelming for the human brain to handle.

Fighting to protect the Alaskan coastline, Raleigh Becket (Charlie Hunnam, “Sons of Anarchy” TV series) and his brother pilot the original Gipsy Danger Jaeger. Inexplicitly going against orders, they pursue a Kaiju until a crushing defeat leaves Becket reeling from personal and physical loss. His penance is to build walls along the frontier until he is recruited back into program by Stacker Pentecost (Idris Elba, “Prometheus”), a man of a deftly adroit past. With Kaiju attacks becoming more frequent, one final attempt is being made to save the world out of Hong Kong Yaeger superstation — a Dr. Newton Geiszler (Charlie Day, “Horrible Bosses”), with the help of Kaiju black market Mafioso, Hannibal Chau (Ron Perlman, “Hellboy”), has discovered a potential weakness while studying portions of the monsters’ brains.

Audiences are sure to figure out if this last ditch effort works, but daddy-issues, stale character development made all the worse due to wooden acting (I’m looking at you, Rinko Kikuchi) and little substance to go with the cheese-coated dialogue makes it difficult to wade through to see it reach its conclusion.

Soldiers of the future.

But when they do (and they will), Pacific Rim springs to life. The battles between the impressively rendered giants are really something to behold — editors John Gilroy and Peter Amundson keep the viewer firmly stationed in the frame laid out by cinematographer Guillermo Navarro (no shaky-cam here folks) which really drives home the enormity of it all. And when these visual elements are paired with a musical assault by Ramin Djawadi (and some potently alluring sounds let off from the Jaeger and Kaiju themselves), there’s no escaping (and they won’t want to).

It’s obvious where the 180-million+ dollar budget ended up, but unfortunately for del Toro (and viewers) he needed at least 20 million more to prop up everything else in the movie that wasn’t computerized. Idris Elba exclaims triumphantly, “Today, we are cancelling the apocalypse.” Too bad he couldn’t have cancelled the checks to his mostly undeserving costars. More established actors could have helped Pacific Rim reach its true potential. 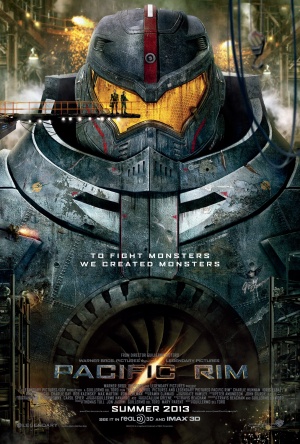