The Katyn Massacre was a series of mass executions of Polish nationals carried out by the Soviet secret police in April and May of 1940. Though the Soviet Union claimed that Nazi Germany had orchestrated the slaughter in 1941, it officially acknowledged responsibility for the killings in 1990, after decades of state-sponsored cover-ups. Piotr Szkopiak has molded these true events into an espionage whodunit set in 1947 England, where a string of seemingly unrelated suicides being investigated by a local journalist may actually be linked to the massacre. The Last Witness does boast a deeply fascinating premise and theme; although its lackluster visuals, awkward plotting, and mixed performances result in stunted potential and little memorability.

Stephen Underwood (Alex Pettyfer, “Elvis & Nixon”) is conducting an unsanctioned investigation of Eastern European refugees committing suicide in unnaturally high numbers. He is aided by his police captain brother John (Gwilym Lee, “The Tourist”) and his army officer mistress Jeanette Mitchell (Talulah Riley, “Westworld” TV series), while hiding his research from his paper’s editor-in-chief Frank Hamilton (Michael Gambon, “Victoria & Abdul”). He eventually meets and grows increasingly suspicious of Colonel Janusz Pietrowski (Will Thorp, “Unhallowed Ground”), and his mysterious and guarded Polish friend Michael Loboda (Robert Wieckiewicz, “In Darkness”), leading him to a series of connections between the British Government and one of the Soviet Union’s most notorious crimes. Also contextualizing this film’s release is that the contemporary Russian government still refuses to classify the Katyn Massacre as a war crime or attempted genocide; which is the same position they take toward the millions of victims of the Soviet Great Purge.

Szkopiak is no stranger to directing mysteries, having helmed numerous episodes of “EastEnders,” “The Coroner,” and “Shakespeare & Hathaway: Private Investigators.” However, something seems to have been severely degraded in his transition back to feature films. Edward Ames’ cinematography has scattershot moments of depth and complexity (especially when Stephen’s snooping develops international ramifications, his placement in the frame becomes ever more isolated and diminished), but it remains relatively uninspired and overly economical to a fault. Though a standard in many procedural dramas, there is only so much shot-reverse-shot verbal exposition the mind can consume before becoming catatonic, and in The Last Witness, this is a veritably fatal choice.

This can also be an accurate reflection on Szkopiak and Paul Szambowski’s screenplay; possessing all the pieces they need to craft an effective mystery, though their reliance on overworn expectations through under-brewed apprehension results in a catalytic lack of atmosphere and suspense. The stakes against the protagonists are gigantic, and indicative of a multinational corruption that actually shook the associated nations to their cores. In the film, the impressive (and devastating) scale of the murderous scandal is often explained vocally by characters briefly, rather than the audience experiencing it vicariously through the mystery being uncovered. This is also bogged down under a clichéd, overtly contrived romance that has little actual chemistry and lacks a conceivable backbone beyond serving as a mustache-twirling plot convenience for the antagonists.

Pettyfer and Riley are severely miscast, their performances — whether independently, or as a couple — are consistently obtuse and awkward. However, this feels significantly attributable to the lusterless direction and wooden characterization rather than just the actors, as they have numerous stand-out performances throughout their careers. On the other hand, Thorp and Wieckiewicz are fully believable and emotionally intense; convincingly selling the dire gravity of their characters’ situations.

Though The Last Witness has some flashpan instances of intrigue and interesting artistic flourish, the film ultimately lacks the chops needed to succeed as a whodunit, conspiratorial thriller, or historical document. 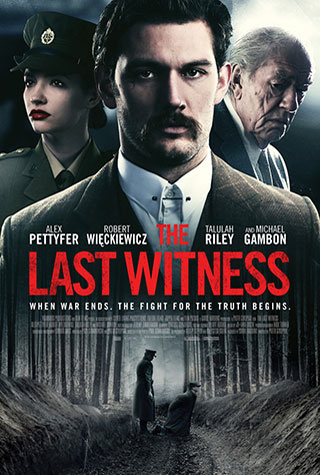