So the cinematic imagination is put to the ticklish test when two of the most iconic figureheads from the 70’s meet on an impromptu spur of the moment. The Oval Office handshake involving the beleaguered minds of rock-n-roll legend Elvis Aaron Presley and presidential enigma Richard Milhouse Nixon is the off-kilter subject matter of director Liza Johnson’s imagined comical canvas Elvis & Nixon. The off-the-wall take on the National Archives imagery showcasing “The King” and “Tricky Dick” in a behind-the-doors session at the White House is indeed a grand and glib gimmick to behold. Instinctively, Johnson and screenwriters Joey and Hanala Sagal along with Cary Elwes concoct a surreal serving of historical nostalgia when conjuring up the hearsay in reference to musical powerhouse Presley showing up virtually unannounced at 1600 Pennsylvania Avenue in December 1970 to strategically talk turkey with Nixon.

The source for Presley’s (played eerily spot-on by Academy Award nominee Michael Shannon, “Revolutionary Road”) presence at the White House stems from his supposed intolerance for the moral declining of the country due to a shocking news report viewed at Graceland. As drugs and other undesirable goings-on threatened to engulf the United States in expanded turmoil, Presley’s outrage led him to want to do something about this national dilemma. And since “The King” had worldwide clout as a music heavyweight then why cannot he take the golden opportunity to do something about America’s so-called deteriorating plight? Presley, inspired to becoming an undercover federal agent, could kill two birds with one stone by a.) solving the existing narcotics problem plaguing the American youth and b.) serving as a badge-carrying crime-buster whose ambitious motivations could be as impacting as his revolutionary roots in the musical universe. So the question arises: How can Elvis Presley achieve his lofty goals as a drug law enforcer and heralded savior committed to exposing the drug-taking radical hippies?

Enter President Richard M. Nixon (two-time Academy Award winner Kevin Spacey, “American Beauty” and “The Usual Suspects”). Presley realizes that in order to fulfill his dream of becoming a federal narc-buster and establishing his credibility to do so he will need to break bread with Nixon. What Elvis wants is what Elvis is determined to get so he enlists his long-tie buddy Jerry Schilling (Alex Pettyfer, “The Butler”) and Memphis mob mate Sonny West (Johnny Knoxville, “Bad Grandpa”) to do his bidding and appeal to Nixon aides Egil “Bud” Krogh (Colin Hanks, “The Guilt Trip”) and Dwight Chapin (Evan Peters, “The Lazarus Effect”) to set an appointment with the president. However, Nixon — not really schooled on Presley’s pop cultural popularity — is not too thrilled to meet the celebrated singer and rebuffs his request to converse with the former “Elvis the Pelvis” hip-swerving personality. After all, the conservative Nixon has no time for associating with long-haired vocalists.

Thankfully, Nixon’s daughter Julie is an avid fan and wants to get Presley’s autograph and close-up as any die-hard female admirer would aspire to do from “King of Rock ‘n Roll.” Suddenly, the opportunistic Nixon has a change of heart and sees the benefit of getting close and cozy with Presley as this may translate to winning over the youth market come election time. Soon, Elvis and Nixon seem to be at ease and chat loosely at will. Naturally, the photo op is derived from their cordial exchange as the camera-snapping antics would cement the larger-than-life figureheads as an unlikely duo in the eyes of a head-scratching audience.

Elvis & Nixon is subtly wacky and invites all kinds of colorful speculation as to what really transpired between a couple of accomplished men in their professional fields whose personal transgressions would later surface to remind their enthusiastic followers how really broken and complicated they were despite their public perception of success, accountability and brilliance. Shannon, always an impish and adventurous performer, embodies the Southern swagger of Elvis Presley with robust ridiculousness, but shows the well-intentional performer as the unrealistic societal avenger out to eradicate the subversive groups looking to ruin his beloved America with the same debauchery that would later come to hamper Elvis’ own existence. Spacey’s Richard Nixon is portrayed as an ambivalent huckster whose insecurities and uncertainties are embedded in a political leader already battling political demons beneath the surface. Johnson presents her fictionalized well-known tandem as a delusional pair who happen on the same page to rid the country of the perceived ominous riffraff that threaten to turn the USA into a perverse playground. The inside joke is loud and clear as Presley and Nixon anointing themselves as the “Guardians of Goodness” is suggestively humorous if not sad in reality.

The off-hand exploration of two lost souls protected by their fame, rabid backers and influential circles fuels Elvis & Nixon with the anecdotal amusement and perplexity. It is engaging, roguishly witty and plays with its psychological parallels with breezy revelation as it attacks what the audience thinks they know of the era’s two polarizing superstars from different walks of life, both personally and professionally. 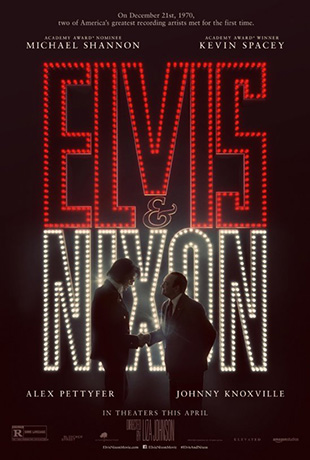