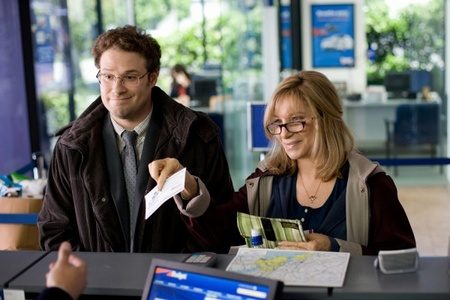 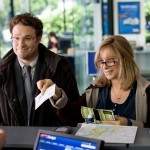 Directed by Anne Fletcher (“The Proposal“), the newest Paramount release The Guilt Trip is a mixed bag — or hodgepodge, if you will — of productions such as “Tommy Boy,” “Broken Flowers” and any number of road pictures made over the last 60 years. That’s not to say it is a bad movie, indeed it does have its quiet, funnier moments, but it is also sadly predictable and its herky-jerky feel is sometimes difficult to deal with in just a short 95-minute running time.

The best thing about it is — surprisingly — the chemistry between the leads, Academy Award-winning Barbra Streisand (“Meet the Fockers“) and Seth Rogen (“50/50“). Their moments onscreen together (approximately 98 percent of the time) goes from depressing to hilarious to pathetic to joyful. Like many mothers and sons, they bring out the best and worst in each other, but love still comes through and even though the best intentions are not always realized, at the end of the day, they still have the unbreakable connection of family on their side.

Here, Rogan plays Andrew “Andy” Brewster, an organic chemist who has invented a green cleaning solution made from palm oil, soybeans and coconut. It seems to be a miracle concoction, but it won’t sell itself — he now has to go on the road and plug the product to different corporate entities such as K-Mart, Costco and WalMart. It’s a task easier said than done; Andy, while intelligent, is boring, passionless and lifeless. Andy’s mom Joyce (Streisand), on the other hand, is anything but. She is the stereotypical Jewish mother: Nagging, insensitive, brutally tactless and an interferer in every aspect of his (love) life.

But against all of his instincts, he nonetheless invites her to accompany him on his must succeed, sales road trip from New York to Las Vegas.

Right from the start she influences him to choose a compact car over an SUV. She even reconnects him to an old high school sweetheart, Jessica (Yvonne Strahovski, several TV series, including “Chuck” and “Dexter“), who is now married and pregnant with her second child. The scene is painfully familiar to anyone who lost the love of their life only to see them happier since they moved on.

Naturally, since Andy is a repressed, uptight, condescending know-it-all, and his mother is a happy-go-lucky free spirit, with few social graces, there is going to be major conflict. This arises in a hotel room where the humor turns nasty on a dime and both express an almost seething hatred for one another. 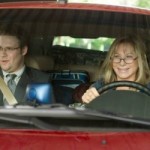 These scenes were a bit difficult to take, since we know they have their differences, but the venom and vindictiveness of this conversation even threw this author for a bit of a loop. There are, however, a few lighter moments that get The Guilt Trip back on comedic footing — Joyce tries to eat a 50-oz. steak in Texas to save Andy a $100 tab, she meets a Lone Star hunk, Ben (Brett Cullen, “Red Dawn”), and they visit the Grand Canyon in a scene right out of “National Lampoon’s Vacation” — before the son finally takes a little of mom’s advice in a last-ditch presentation to the Home Shopping Network.

The real belly laughs of The Guilt Trip come few and far between, while the softer moments shine and the dialogue (provided by screenwriter Dan Fogelman,”Crazy, Stupid Love”) carry the movie. The pure joy on Streisand’s face when she finally sees her son open up to really sell his product is wonderful, for example.

Some critics are calling The Guilt Trip a “Bad Trip,” but I disagree. Yes, the pacing could have been smoother and the predictability level was a bit high, but for a modern comedy not to have to fall back on nasty, mean, gross-out or bathroom humor is quite refreshing (that is of course until “This Is 40” throws us all back into the toilet again). 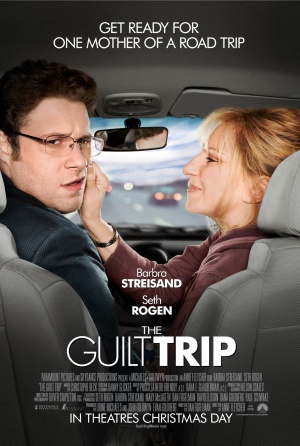