If you had to pick one aspect about yourself that keeps you from being the best person you can be, what would you list? For me, it’s getting involved in more activities then I can possibly handle. I believe this issue puts a dent in my integrity as someone who wants to be a man of his word. As but a single person with a lot of interests it’s been a tough go, but I’ve now conditioned myself to only commit to a few things at a time so I can become a master of some (and not a master of none) while improving my reliability.

So how do you do it? How do you change? For many of us, like me, it’s a long and painful process of trial and error; gaining various experiences in life so that one day, you are no longer handicapped by what you don’t know or can’t do. For other people, it’s buying books, listening to podcasts, and even going to a yearly conference that is framed to transform their life forever.

Tony Robbins: I Am Not Your Guru is for the people who identify themselves as the latter.

It is the latest documentary from Academy Award nominated filmmaker Joe Berlinger (“Paradise Lost” trilogy, “Under African Skies”) focusing on Tony Robbins, the famed life, business strategist and best-selling author. His film allows us to spend six days inside Robbins’ centerpiece mega-event in Boca Raton, Florida . . . his “Date with Destiny.” This annual seminar is meant to help the thousands of people who attend to not just discover their true selves, but also change their own lives for the (hopefully) better. Meanwhile, this documentary attempts to give us the opportunity to examine the seminar’s true effectiveness.

Anchoring us into this world is the man who started it all: Tony Robbins. Towering over others at six feet seven inches, with a former NFL linebacker-like frame and a wide, flashy smile, Robbins brings a brash, no-nonsense character. Along with that, Robbins boasts a deep and raspy voice, which further projects a stereotype of an intimidating figure. However, it is these commanding traits that help draw many people to seek his wisdom.

During the film, we meet some of those wisdom seekers. Robbins picks them out from the huge crowd and listens to their stories and heartbreaking circumstances. After listening, his responses would vary, but his main objective is to give each person insight into their true problem. Although his intent is for people to figure out what steps they need to take to help themselves, his influence in their life-altering choices can’t be denied.

Shot in cinema-vérité style — which gives the viewer a fly-on-the-wall experience into Robbins’ fast-paced world — we absorb it all thanks to Berlinger’s steady direction as a veteran filmmaker. While the documentary attempts to give us multiple people with different stories, most of those we encounter belong to a similar demographic. We aren’t shown the effect that Robbins has on other people in the United States (or the world for the matter) despite seeing brief glimpses in montages. And though the film tries to focus on people who have had major life breakthroughs, it would have been interesting to follow people who didn’t think the seminar was beneficial to them or had suffered setbacks.

As for the clearest moments of Tony Robbins: I Am Not Your Guru, they’re in the main conference room with Tony on stage, engaging with the crowd altogether or with magnetic one-on-one encounters. Unfortunately, the film’s haziest moments occur during the group sessions that take place outside of the main conference room. Robbins touts himself as a man who doesn’t believe in talking about surface level issues, he wants to go deep. It’s in these group sessions where people go deeper with their life coaches (who work with Robbins). This is useful information that we aren’t granted witness to, which makes this film unexpectedly shallow.

Yet, the film’s success will be based on your own particular interest on the self-help movement or previous knowledge of Robbins himself. Outside of that, you may be drawn to the true life tales of the people who are featured — some of which will leave you in a stunned silence. Overall, I must admit that I was intrigued by Tony’s methods and the process of his conference, yet I remain a skeptic of how this seminar transforms people beyond a short-term high. But here’s what I am convinced of: Robbins truly is a great communicator.

However, if Robbins’ mission is to see transformation in the lives of many, then Tony Robbins: I Am Not Your Guru shouldn’t be restricted from showing us (the moviegoer) specific steps to achieve a breakthrough of our own. And by not doing so, the film’s purpose becomes clear (even if its intentions were limited beyond its control). That’s why if the film could speak, it would say, “Thank you so much for watching this very special infomercial! We hope to see you in Boca Raton next year! If you truly want to have a new life, don’t forget to bring lots of cash!” 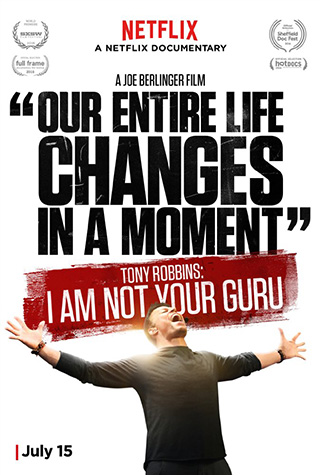