I know what you’re probably thinking. “BnB Hell — must be a terrific horror-thriller! I’m sold on the title alone!” Well, far be it from me to razz you for your terrible taste, but I insist on disabusing you of the notion that this is worth anyone’s time, let alone money. Let us delve into the relentless badness that is BnB Hell.

A young woman named Willa (Kimberly Woods, “Ditching Party”) is searching for her sister, who’s been missing for a couple of months. The trail has led to an off-the-beaten-path bed and breakfast in the Hollywood Hills. Willa arranges a stay, hoping to find out where her sister went to next — “If she even stayed here,” Willa declares as she glumly creates a video recording her sleuthing. Foreshadowing alert?

She’s met first by the creepy neighbor from across the street, a man who’s just about as “there” as you’d expect a creepy neighbor to be, and then — after wandering into the unlocked, open door of the BnB, as you would normally do — the witch-like proprietor of the establishment (Carol Stanzione, “Hansel vs. Gretel”), who brusquely demands to be called Mommy. Again, as you do. Mommy gives Willa the lowdown on the place, indicating that the only other resident at the moment is also there alone after his girlfriend left him during their trip. The girlfriend is mentioned once more during the film, in case you were thinking that might be an interesting story thread to follow.

Later, the now bored-out-of-her-mind Willa experiences some weird events. Someone places a CD player on the deck outside her room that plays a CD that skips constantly. It does take our heroine a bit too long to figure out that unplugging the machine rather than turning it off is the key. After she returns to her room and gratuitously undresses to get ready for bed, she notices a handheld video camera.

Putting two and two together, Willa comes up with a negative attitude and stomps over to the domicile of the other resident. She yells at his door and gets no response. Frustrated, she wanders into the kitchen and pours herself a shot of something. A shot glass flies out of the cupboard, which leads us to the MacGuffin of BnB Hell — a small keepsake box containing scores of SIM cards. A note on the box instructs the reader to use the camera to make memories of the lodging and then leave them for others to see. Hey, this might be a clue toward the sister’s disappearance! Willa vows to look at the cards to see if her sister is on any of them.

What I’ve described probably could have been condensed into ten or fifteen minutes, but it takes up about half of the movie.

Willa doesn’t find much out, and we as the audience gain little insight as to what in the Sam Hill is a-going on around this establishment. Is Mommy a bad person? She kind of acts like one, but maybe that’s just a little bamboozlement on the part of the filmmakers. What about this other resident? Could he turn out to be someone who helps Willa out only to later reveal himself as the Guy Behind It All? Or maybe he doesn’t figure into anything and is just an abstract target for Willa’s frustrations at being the only one (apparently) who cares that her sister is missing. If, indeed, she is missing.

Suffice to say that the second half of BnB Hell features some actual action, but it’s so disjointed and ridiculous that the whole bit is almost as dull as the first half. The big reveal is nonsensical and is offered without any sort of explanation. The fight scenes appear to have been choreographed by a blind man. There are so many questions left unanswered, but you won’t care enough to follow up on them in your mind.

The one highlight is Stanzione as the twisted innkeeper. Stanzione does a terrific job keeping the viewer on their toes as to her true intentions. Could she be a villain or just mean? The difference between her Mommy and any of the other characters is that Stanzione provides depth to the role, so the viewer actually wants to know more about her. This is not to say that the character is exceptionally well written, just that Stanzione really knocks it out of the park.

Yeah, so BnB Hell isn’t really all that good. It’s not bad-good, either. It just kind of lays there, hoping you’ll notice it, but disregard its many, many shortcomings. 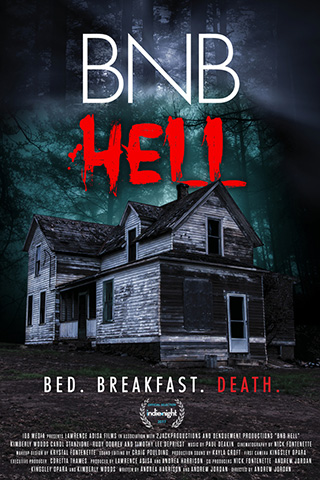