Inspirational dramas are inherently uplifting, motivational and psychologically gripping. Their feel-good elements or inevitable triumph-into-tragedy climaxes are the functional foundations behind rewarding, emotionally-charged cinema. However, tear-jerking tales of adversity sometimes often fall into the realm of derivative dramatics that register in mawkishness despite their well-intentional pursuit of truthful sentimentality.

Writer-director T.C. Christensen’s (“The Cokeville Miracle”) moving film project, Love, Kennedy, is certainly a celebration of the human spirit. The narrative — based on a true story — tells the heart-warming tale of Kennedy Ann Hansen, a teen whose life was cut short in 16 brief years due to her infliction with the incurable Juvenile Batten Disease.

Christensen clearly shows respect and admiration for his courageous, sickly youthful heroine. Although it is thoroughly poignant and touching, however, his movie never really explores the deep-seeded trials and tribulations of this vulnerable young woman beyond going through the motions of chronicling the devastating disease in formulaic, by-the-numbers fashion. The strife feels transparent and the audience never experiences the genuine, quieted grief that one would imagine the tormented characters would be suffering through. And while hope, positivity and loving spirit still comes through, this conventional design stifles the convincing tension and wandering anxieties of the film’s youthful leading lady and the loved ones and close associates that benefited from her pleasures and pain equally.

Kennedy Hansen (Tatum Chiniquy, “Hollow”) is the typical spunky Odgen, Utah-grown gal that seemingly lives an ideal existence. She is surrounded by supporting and caring parents Jason and Heather (Jasen Wade, “Mythica: The Iron Crown” and Heather Beers, “The Hollow Point”) as well as her two siblings. The pretty Kennedy is well-liked and has expectations of becoming a cheerleader and finding that special love whose affections and companionship can be reciprocated to her. Sadly, Kennedy’s continuous physical mishaps at school cause major concern thus warranting the parents to bring her to a doctor for answers.

Well, the diagnosis is not good as poor Kennedy is diagnosed with a rare neurological disorder known as Juvenile Batten Disease . . . a tragic and crippling ailment that targets adolescents and has a mortality rate of 100-percent. Naturally, this is stunningly terrible medical news for Kennedy and her family and friends. With no cure in sight, Kennedy (and other children in her dire predicament) simply has to endure her debilitating disease and cope with the frustrating realities. Nevertheless, she remains a unique gift to those that seem to draw encouragement and strength from her disease-driven plight.

The one thing that has to remain constant to combat the negativity of her horrific health issues is to make sure that Kennedy lives her life as normal as she can in the precious limited time she has left. Thus, the active Kennedy delves into her beloved activities (with her parents’ blessings, of course) in and away from the school environment and even serves as the much-needed psychological cheerleader for her fellow fragile facility mates. Kennedy does not have the time to feel sorry for herself, so why should her supporters?

Ultimately, the winning message behind Christensen’s character study of this young, wondrous woman is to instill a sense of pride and purpose for life. The proof is in the pudding — the emotional obstacles that both the real-life and fictionalized Kennedy Hansen confronted no doubt will break the hearts (and solidify the souls) of those who are self-doubting their lives. In its own indelible way Love, Kennedy promotes the push of miracles and meaning to create hope in the emptiness of the living.

It is almost sacrilege to find fault in an independent film that is grounded in faith, belief, the power of love and survival and critical spirituality. Still, Love, Kennedy never comes full circle in its embracing of disillusionment in the face of overcoming overwhelming odds or allows Kennedy and her admirers to connect to that underlying bitterness for a better connection and raw emotional fulfillment. The characters feel rather slight and inexplicably removed from the deep-seeded sadness at large while Christensen only safely emphasizes the sappy, tidy endings of an otherwise heart-wrenching story. The subplot involving Kennedy’s regrettable demise as the catalyst for enticing her good friend Lexi (Yvonne D Bennett, “Brigsby Bear”) and others to reinvest their energies in the church as a miraculous anecdote for the appreciation of healing is somewhat constructive, but mostly comes off as a noble afterthought.

The performances should be commended to an extent, especially the two actresses that take turns at different stages in Kennedy’s life (Scarlett Hazen as the younger version; Chiniquy as the elder). As a movie, the psychological heft limps a bit, but this should not discount the dignity or remembrance of a remarkable young girl gone too soon before her time. 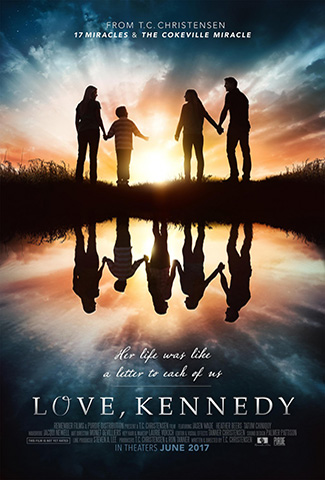