The World War II satire Jojo Rabbit is a daring mockery with war-themed carnage as a surreal backdrop that combines misplaced idolization with an unconventional coming-of-age tale for a young boy. Indeed, filmmaker Taika Waititi (“Thor: Ragnarok”) is wading in rough waters with a strange take of unusual growing pains — particularly when his featured tyke fancies a friendly bonding experience with his imaginary “pal” Adolph Hitler. Bold, offbeat and borderline blasphemous in its sardonic wit, Jojo Rabbit is at times uneven in its edgy humor, but still manages to pull off its fair share of mixing the absurdity with observational amusement.

Waititi tiptoes on the fine line between helming touchy material that may be considered a risky yet challenging ruse or worse . . . serving up an insensitive concoction leaning toward being outright offensive. The motivation in ridiculing Hitler has been the source of satirization previously so there is nothing revolutionary in this sense that his film does. However, wavering within the lanes of silliness and sentimentality, Jojo Rabbit does not bring the same kind of charm and pathos that made something like the Oscar-winning “Life Is Beautiful” such an inspirational gem in its embodiment of triumph and tragedy.

Impressionable ten-year old Jojo (Roman Griffin Davis) is being raised in what amounts to be a tough time — the tail end of WWII in Germany. Obviously disillusioned by the difficult times of his upbringing, Jojo develops an escapist path to combat his indescribable loneliness and despair. The solution: Jojo whips up an imaginary friend to keep him entertained and active. Unfortunately, Jojo’s choice of a pretend buddy is none other than the notorious Hitler. Did I emphasize how lonely and delusional this youngster is?

The coping mechanism for fascism as digested by Jojo is establishing the menacing Der Fuhrer as a breezy playmate. This is a hefty pill to swallow but Waititi (assuming the on-screen role as the misguided minor’s happy-go-lucky companion) is savvy enough to trust the audience with the absurdist witticisms that are attached to the off-kilter premise. Granted that Waitiki’s nutty version of the infamous German dictator does not have the same lofty legs of lunacy as witnessed by Mel Brooks’ impishly warped “Springtime for Hitler” nor does it compare to Charlie Chaplin’s Hitler knockoff, Adenoid Hynkel, from “The Great Dictator.” Nevertheless, Jojo Rabbit devilishly sinks its teeth into the shifty hilarity of hate propaganda that already rubs up against the cynicism of childhood alienation.

For the young Johannes (nicknamed “Jojo”) his immediate reality is tainted by the insidious influences and ideology of the barbaric Third Reich. Clearly, Jojo seeks a sense of purpose as he yearns to be part of something big and meaningful that can counterpunch his youthful inadequacies. His other solution: Joining a Nazi youth camp. Why not? After all, Nazi manhood is something to be valued and respected as the emotionally neglected Jojo strives for popularity and acceptance. More so, Jojo is open to male role models — he is a product of an adoring single mother Rosie (Scarlett Johansson, “Marriage Story”) — and fascist, uniformed soldiers are the epitome of strength and pride (at least as seen through the impressionable eyes of a boy spoon-fed such a tyrannical doctrine every day).

Things change for the young man, however — while at camp, the all-too-sensitive Jojo fails to break the neck of an innocent rabbit when ordered to by Captain Klenzendorf (Oscar winner Sam Rockwell, “Three Billboards Outside Ebbing, Missouri”). This humane act earns him the cruel nickname Jojo Rabbit by the monstrous Klenzendorf and he is mocked by the whole camp.

Then, while at home, Jojo discovers that his mother has been secretly sheltering a young Jewish girl named Elsa (Thomasin McKenzie, “Leave No Trace”) — a former schoolmate of his late sister. Because of Elsa’s Jewish background the conflicted Jojo has to confront all the embedded hatred that has been drilled into his head. Remember, Elsa is the inferior enemy that is deemed worthless by “the master race.” How can he in his right mind like someone that is supposed to be off limits to him? This does not stop Jojo from gradually getting close to Elsa. Besides, why even worry about pleasing those that humiliated him and labeled him weak and undisciplined?

In a nutshell, Jojo Rabbit is both wicked and whimsical in its quirkiness that sticks its tongue out at the festering corrosion of destructive intolerance. Both Davis and McKenzie are superb as the pair of youngsters served up as the sacrificial lambs of innocence within the brutality of Hitler’s Germany, while Johansson is steadfast as the motherly spirit that serves as the lone symbolic thread of decency. Rockwell delivers another strong performance, providing the firepower of head-scratching fanaticism as a Nazi fueled by his beastly banality. Supporting roles from the likes of Rebel Wilson (“The Hustle”), Archie Yates, and Stephen Merchant (“Fighting With My Family”) round out this subversive comedy by adding some well placed levity.

There is no denying Waititi’s irreverent hand behind the punch of Jojo Rabbit. His on-screen simpleton Hitler portrayal and off-screen dynamics (directing, writing and producing) deliver a motivating romp that is deepened in its salient commentary about depravity at its absolute worst. In the hands of anyone else, it’s hard to imagine the film being as good. 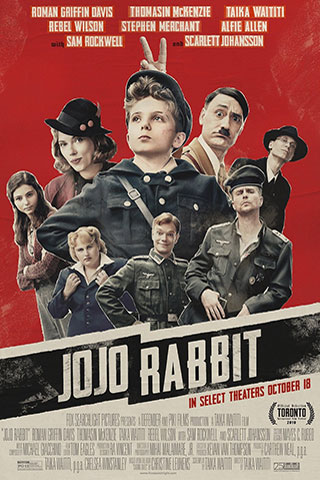