Interestingly, it is the audience who seems to be the ones getting hustled in director Chris Addison’s forgettable feminine con-artist comedy, The Hustle. In it, Oscar winner Anne Hathaway (“Les Misérables”) and funny fireball Rebel Wilson (“Isn’t It Romantic”) are paired as a couple of cute scammers looking to manipulate the finances out of clueless cads who fall to their false charms. However, the nonsensical antics that transpire throughout the movie feels lackluster and limp — ironically the biggest con that the tepid tandem of Hathaway/Wilson pulls off in this quirky, yet deceptive, dud.

The Hustle merely exists for the purpose of its diva double-trouble novelty act. Hathaway gets to play dress up while harboring a snooty accent. As for Wilson, she demonstrates her usual over-the-top wackiness of which she does with all her previous roles. Basically, Addison’s by-the-numbers direction and Jac Schaeffer, Dale Launer, Paul Henning and Stanley Shapiro’s spotty script hampers whatever leftover impishness that exists in this flaccid farce. There is nothing distinctive or daring about these female fleece artists that register as humorously contemptible or crafty. Two competitive women looking to take the screws to the men that wronged them should have been fantastic fodder. Hathaway is classy and refined. Wilson is gassy and undermined. Combined they’re the tried and true “opposites attract” method of comedy. However, The Hustle does not quite stand up as the slick romp it hints at being although its basis stems from the rollicking 1988 Steve Martin/Michael Caine vehicle “Dirty Rotten Scoundrels” and its original 1964 blueprint “Bedtime Story.”

Here Hathaway channels Caine’s Lawrence Jamieson as Josephine Chesterfield, a high-class hustler whose international experience in conning womanizers has supposedly gained her a fortune. Wilson tackles the role of Penny Rust, a low rent hustler like Martin’s Freddy Benson, who specializes in small-time cons. Penny, quite obviously, does not have Josephine’s good looks or grace to pull off anything elaborate. However, Penny’s erratic presence in the posh French town of Beaumont-sur-Mer is affecting desirable Josephine’s shifty games(wo)manship. Something has to give as both unctuous ladies cannot keep stepping on each other’s toes when there is a luxury at stake to swindle from the local, wealthy lunkheads.

Thankfully, the elegant Josephine takes the uncouth Penny under her wing to teach her the ropes. So when an eligible target in billionaire tech titan Thomas Westerburg (Alex Sharp, “How to Talk to Girls at Parties”) enters the picture, a succulent challenge presents itself for the curvaceous con artists to apply their gold-plated shenanigans. Since Josephine and Penny want to secure their spot as the resident hustler, they scheme that whoever can conquer and squeeze Thomas for everything he has will be declared the winner, while the loser leaves town in defeat.

Can the sleek and sexy Josephine outwit, outplay, and outlast the unpolished Penny for Thomas’s vast riches? Will Penny pull out a miracle and give Josephine her comeuppance once and for all? How long will it take for these dirty, rotten men to wake up and smell the coffee and realize both women are deceitful witches on the prowl? All these questions and more are answered . . .

Regrettably, the answers aren’t worth the 93 minutes it takes to get them as The Hustle trudges on like the strained, unfunny comedy that relies on the lazy gimmick of its premise that it is. The given physical sight gags (slender beauty Hathaway and cherubic average Wilson), the hackneyed humor, the feigned swanky European lifestyle, the paper-thin con games — all land with a thunderous thud. Wilson’s “Fatty Patty” silliness sets up the telegraphed weight jokes to the point of tedious annoyance. The mismatch coupling of Hathaway and Wilson is about as conveniently appetizing as a pickpocket trapped in a crowded elevator with people with bulky wallets — the scheming and plotting by the trifling twosome comes off as absolutely pedestrian. Their pairing is simply a toothless gag that misses the opportunity to raucously shred apart both the pretensions of the European jet set and satirize cynical femininity. 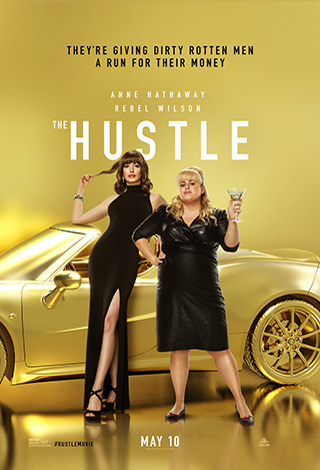