Isn’t It Romantic is extremely self aware, breaking the fourth wall with more frequency than “Deadpool.” It knows the tropes that define the rom-com genre and the rules at play. Thus, there is a desire to establish itself as something different. The problem here is — it can’t. It functions on the complexity level of the grandfather paradox, where the more it tries to not be the usual romantic comedy, the more it satisfies the requirements of being one.

While there are unconventional elements to the movie, it is for the most part a conformist. Not only that, it feeds on nostalgia of the rom-coms that have come before it. “Pretty Woman” is used as part of the opening sequence and shows up in other segments of the movie as well, with bits of “When Harry Met Sally” and “13 Going On 30” dunked in for good measure. I know I should frown upon this preying on sentiment, but I would be lying if I said I didn’t enjoy this movie more than I should.

It has a decent protagonist in the form of the charmingly funny Rebel Wilson (“Pitch Perfect 3”). Her character, Natalie, is a bit of a pushover, the nice one in the office who gets taken advantage of. She is a talented architect, but seems reluctant to showcase what she is capable of. She also has a strong dislike for romantic comedies and the lack of realism they possess. Her skepticism is so immense that she would rather believe that her co-worker/best friend Josh (Adam Devine, “Why Him?”) is gawking at a billboard featuring a hot woman than admit to herself that she could be the object of his affection.

This all changes when she suffers a head injury from a mugging gone wrong (though when has a mugging ever gone right), finding herself plunged into the world of a PG-13 rom-com. To leave the world, she needs to follow the obvious breadcrumbs to finding love at the end. It does seem to develop quite easily, because all the men in this new love doped-up world seem to find her irresistible and “beguiling.”

Here is where the gorgeous and wealthy Blake (Liam Hemsworth, “Independence Day: Resurgence”) makes his entrance. He sweeps Natalie away on romantic getaways and secluded moments of ice cream eating. However, anyone familiar with the territory of romantic comedies knows that Blake isn’t the one she ends up with — cue the best friend. Only there is the minor hiccup of said best friend getting dazzled by the lovely Yoga ambassador, Isabella (Priyanka Chopra, “Baywatch”).

Natalie finds herself in the same position that has plagued rom-com protagonists since the beginning of time, where she needs to stop the wedding and win the man by professing her feelings. However, because this is an anti-rom-com, there is of course a significant twist in the road. But before we even get to wedding crashing and epiphany having, the writing trio of Dana Fox, Erin Cardillo and Katie Silberman devise a good song and dance sequence to lighten the mood. It’s not particularly well choreographed, but the bulk of the cast, namely Wilson, Devine and Chopra, handle it well as they have starred in previous movies with singing and dancing.

Isn’t It Romantic isn’t quite as subversive as it claims to be. Sure the lead is an unconventional type of attractive, Devine might not be the looker Hemsworth is, but there is enough charm and investment for it to succeed as a romantic comedy. Has it done enough to be among the great rom-coms? I don’t think so — but it is still an entertaining ride. It is the escape I was searching for in a long work week, offering me the respite to laugh and be reminded of how wonderful the world can be — and that is the defining trait of a romantic comedy, after all. 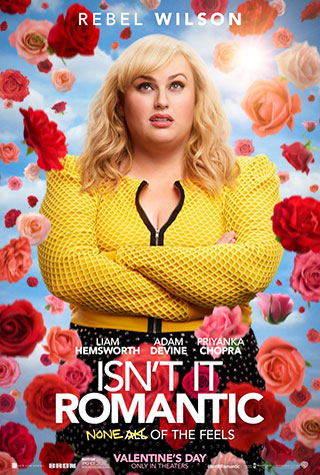