Dennis Quaid’s perverse Peeping Tom is the central psycho in director Deon Taylor’s home invasion hokum, The Intruder. Formulaic and faceless, Taylor’s (“Traffik”) domestic drama merely echoes the familiar foundations of other generic goosebump-instilling thrillers chronicling the exploits of a stalking menace out to majorly inconvenience the tranquility of a passionate married couple. From yesteryear’s “Pacific Heights” to contemporary home-bound horror shows such as “Lakeview Terrace,” The Intruder skims the surface with its flimsy frights and predictable paranoia. Unimaginative and clumsy, this generic groan-at-home sideshow’s only genuine appeal is watching veteran screen star Quaid overly ham it up as the intruding, nutty nemesis hellbent on reclaiming his territory.

Of course, there is a backstory to Peck’s unstable demeanor. Charlie, a casualty in the misplayed game of misguided business practices, finds himself financially strapped and is forced to give up his prized homestead due to his monetary predicament, not because he wants to move on. Clearly, the heralded home is near and dear to Peck’s twisted heart. It is the treasured venue where he feels free to unleash his rage — just ask his dead wife (if she could talk) and the countless dead deer that Peck’s killer mindset is responsible for. Although Peck was compensated accordingly and could actually ride off into the sunset he decides to live in secrecy in his . . . er, the unknowing Russells’ new basement. Talk about the mystery tenant from hell that refuses to leave!

In the meanwhile, Scott and Annie must wonder why Charlie’s presence is so glaringly persistent. At first, he informed the Russells that he was heading to reside in Florida where his daughter (Lili Sepe, “It Follows”) is living. Conveniently, one thing seems to happen after another resulting in Peck’s prolonged delay to leave the area. Sudden drop-ins here and there start to take a toll on the couple’s privacy and intimacy. How can this good-looking couple feel stimulated about each other when this meddlesome visitor is walking around or peeking through windows or lingering around corners?

Scott soon finds Charlie creepy and intrusive to the point of no return, however, Annie appears more sympathetic and understanding of Charlie’s need to stick around in a home she feels that he is attached to so strongly. Cue marital strife. The Russells — at least we are told indirectly — have had some previous breakdown lapses in their marriage. But now possibly the nefarious squatter Charlie Peck may be the key reason their marriage fails. Hoping to start a family and bask in their newly acquired 3.3 million dollar palace, Scott must somehow figure out a way to fend off Peck’s unwanted intrusion while appeasing his wife.

Consequently, The Intruder trudges through the mundane motions as yet another half-baked, pseudo-seedy home-based horror show tucked away in the exclusiveness of suburbia. Both Taylor and Loughery guide audiences down a rudimentary road as their meager material flexes — at best — a mediocre macabre muscle between two men defending what is perceived as their entitled space. Black, erudite professional Scott Russell wants to protect the sanctuary of his wondrous wife and newly acquired domicile, while white gun-toting, country boy Charlie Peck does not want to let loose of his cherished manse. Pitted in the middle as the reasonable referee, sensible Annie Russell is caught in the middle between her exasperated husband and the clingy former homeowner. Unfortunately. Ealy’s uptight Ying to Quaid’s crazed Yang has limited intrigue, and becomes rather tiresome, rather quickly.

Nevertheless, Ealy and Good are effective as the affectionate couple tormented while in the luxury of their secluded surroundings. It is too bad that they are reduced to arbitrary pawns at the hands of Quaid’s over-the-top, cheesy instigator with the ever maddening annoyances. Still, Quaid’s psychopath Charlie Peck — perhaps an unintentional poor man’s throwback to the demonic Jack Torrance from “The Shining” — does have colorful depravity that works its magic even though the flaccid story never aptly supports his sinister tendencies. Beyond Quaid’s devilish antagonist, The Intruder exists as a demonstrative dud that regurgitates commonplace clichés found so readily in practically every other home invasion thriller. 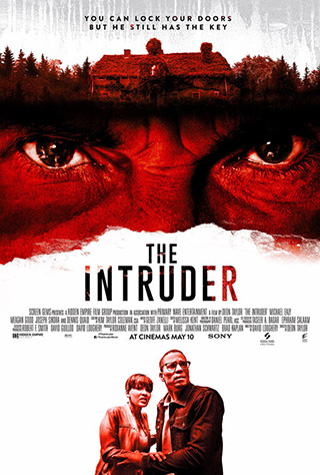