Pokémon Detective Pikachu is a film not unlike the Pokémon that populate it. On the surface it appears simple — a collection of seen-it-before neo-noir aesthetics, cute creatures, and a generic story, all tied together with a few charming leads. However, this is merely a façade. Before long it reveals itself to be a beast with unique qualities that are both difficult to quantify and wonderful to behold.

It’s a science-fantasy-noir-adventure-thriller for children . . . kind of. The component parts of the movie go together about as well as pineapple on pizza. On paper, it shouldn’t work at all. In practice, it’s a bit more complicated. Certainly, like pineapple pizza, Pokémon Detective Pikachu will not be to everyone’s taste. From top start to finish it is a weird movie; the characters, the story, the world is all weird. But the weird works because Pokémon Detective Pikachu wears its weirdness like a badge of honor.

This is a film where the protagonists are a CGI yellow mouse-monster with a caffeine addiction and electricity powers (voiced by Ryan Reynolds, “The Hitman’s Bodyguard”) and an insurance agent with a long abandoned dream of being a Pokémon trainer and a well of daddy issues (Justice Smith, “Jurassic World: Fallen Kingdom”). The plot around them is one-part hardcore science-fiction and another-part 2000s Steven Spielberg. That plot is then, somehow, repackaged into a children’s movie and injected with more plot twists than an M. Night Shyamalan joint. None of these things should work. This movie should not work. But it does. It really does!

Writers Dan Hernandez, Benji Samit, and Derek Connolly deserve a large amount of praise here as they successfully harnessed the intricate lore of Pokémon to not just create a fully realized world, but to prevent director Rob Letterman (“Goosebumps”), a director defined by his wildness and inconsistency in equal parts, from spinning too far out of control. The world-building skills of Hernandez, Samit, and Connolly cannot be overstated. Ryme City, is a vibrant metropolis where humans and Pokémon coexist. It rivals “Zootopia” in detail and outclasses it in coolness.

Non-fans should not be intimidated by Pokémon Detective Pikachu. An in-depth understanding of Pokémon lore is not required. You don’t need to know more than what you have probably picked up by cultural osmosis — that people capture Pokémon with Pokéballs and make them battle each other. Intense lore is relegated to the background as Easter-egg fodder. Protagonist Tim is about as far removed from that world as possible and is only drawn back in when he returns to Ryme City to look into the death of his father. There he runs into the titular Pikachu. Unlike most Pokémon — who can only say their own name — Pikachu can communicate fully with Tim.

It’s here, focusing on the budding friendship between Tim and Pikachu, that Pokémon Detective Pikachu really shines. The mystery, which implicates a corporate empire, rogue scientists, underground Pokémon trainers, and a Mr. Mime, is a conglomeration of stories done better in some fashion elsewhere. But watching Tim and Pikachu bounce around Ryme City’s hazy-neon streets is a treat, and it makes even the most predictable plot development sing.

There’s undeniable craft here. Cinematographer John Mathieson (“The Man from U.N.C.L.E.”) and composer Henry Jackman (“Kong: Skull Island”) pull out all the stops, giving Pokémon Detective Pikachu a distinct visual and sonic identity. The CGI is top-notch, with each Pokémon — from the cuddling Jigglypuff to the scaly Charizard — feeling tactile in their own fantastical way. Every Pokémon feels organically integrated into the world in a way that helps it rise above cheap branding.

There’s nothing unearned about Pokémon Detective Pikachu, either. It works hard, putting in far more effort than necessary for a children’s film based on a video game. You can feel that earnestness in front and behind the camera. These are people who are excited to be making a Pokémon movie, and it lends the film and unique alchemy that helps it become more than its separate parts.

Pokémon Detective Pikachu is the kind of film that resists conventional ratings. You could try if you want to, but the process is maddening. It’s solid, not “great” by any conventional sense, certainly not “bad,” but just “good” feels too tame. Everything about the film is crazy and unhinged. None of it should fit together at all, but somehow it does. Ultimately, it might not be for you, but if you think it is, then I can’t recommend a better way to spend 104 minutes. 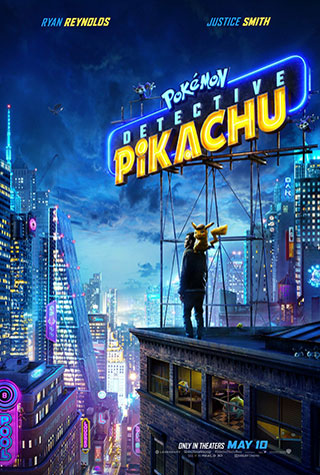