Cold Blood, by writer-director Frédéric Petitjean, is the assemblage of a lot of good ideas that belong in different movies into one 90-minute feature that couldn’t possibly hope to explore them all properly. What we’re left with is the semblance of movie, the component parts of which are so at odds with each other that it never manages to settle into any one idea. I mean we’re talking about a movie that is called “Cold Blood Legacy” (no colon, trust me I checked) on IMDB and Letterboxd, but the poster and title cards at the start and end of the movie just call it Cold Blood. The former would indicate that this movie is part of a series, which it is not. The latter is the kind title that indicates this might be a hardcore film, which it tries and fails to be. In the end what Petitjean has created in this, his directorial debut, is a sense of identity crisis so severe that I am still not one hundred percent certain I’m using the correct title.

The movie opens with an aerial shot of a woman, Melody we find out later (Sarah Lind, “The Exorcism of Molly Hartley”), riding a snowmobile over snowy Canadian peaks. Moments later the woman crashes her snowmobile, and goes tumbling down a hill, severely injuring her leg in the process. She writhes around a bit only to fall unconscious, only to wake up some time later in a secluded cabin, with her wounds being tended to by a mysterious and terse old man named Henry (Jean Reno, “Margaret”). This plot thread is then abandoned for a while as we shift to a follow Kappa (Joe Anderson, “Hangman”), a New York detective who’s transferred over to the Pacific-Northwest to help investigate a mystery of some description, but if I’m being perfectly honest I can’t remember what, only that it connects to Melody in some way.

Kappa may be the most uninteresting character I’ve seen on screen in 2019, and I’m including Mads Mikkelsen’s turn as a poor-man’s John Wick in Netflix’s abysmal “Polar.” Kappa is bereft of any emotional beats, any interesting characteristics, of anything. His only purpose seems to be to walk into scenes and over-explain obvious plot-points that the audience might have missed. Melody and Henry benefit from at least being in the more interesting half of the movie, and having characters with actual characteristics, although these are criminally obvious, to the point of being laughable — Henry likes reading Sun Tzu’s “The Art of War” guys. Lind and Reno are both consummate professionals and do the very best with what they’re given, although it’s clear that they’ve been typecast into playing characters that were done better elsewhere — Reno’s plays a hitman. Again. They also suffer from having no onscreen chemistry together, which is not really their fault, the casting director should have known better from the first read with them together in the same room.

Throughout the 91-minute run-time, you feel as if there are multiple arbiters at play all of whom are pulling Cold Blood in different directions. I was not shocked then, to find out that this movie was a co-production between the United States, Canada, and of all places, the Ukraine. That sort of split interest goes a long way to explaining why some characters speak with accents that would find themselves at home in another country, why others are (poorly) dubbed over, and why every line of dialogue sounds like it was passed back and forth through goggle translate a few times. “That was not a question but a superstition with an affirmative tone,” says one character in a line that painfully fails to sound like it was written by Aaron Sorkin.

The only reason anyone should bother to show up to this feature is for cinematographer Thierry Arbogast (“Valerian and the City of a Thousand Planets”) who does a good job at passing the Ukraine off as Washington state. But even then Arbogast’s best intentions are ruined by the film in places. Every flashback is shot through a filter that is as ugly as it is obvious. By the time the credits were rolling on Cold Blood I had experienced a cocktail of confusion, frustration, and general disinterest so strong that it left me with the nagging feeling that this was probably going to be my least favorite film at the end of the year. 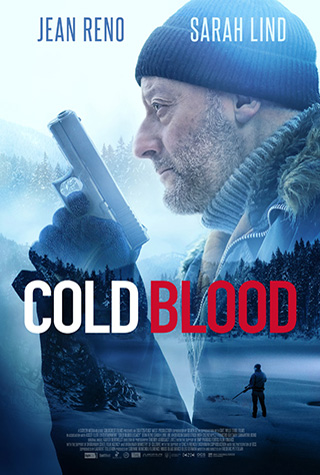