In an interview, Kevin Feige confirmed that he had a plan for the next five years of Marvel Cinematic Universe (MCU) films. When talking about that plan he said — in reference to the possibility of an appearance from the X-Men, who Disney now own — that fans should “not hold their breath” and that “it will be a while” before we see the X-Men in the MCU. I will confess that I was disappointed when I first heard this. However, after having seen Dark Phoenix I cannot help but feel that Feige’s decision is justified. The X-Men need a break from the silver screen.

It brings me no joy to say this. The X-Men are my favorite comic book property. I, like many people, gravitate toward, and find comfort in, their outsider narrative. Their powers coming from genetic mutations rather than cosmic weirdness or super-smarts lends the X-Men a level of inherent humanity and relatability that other comic book films have to work hard for. This is not to say that other comic book films cannot be relatable, “Guardians of the Galaxy Vol. 2” remains the most human MCU films despite starring a talking raccoon. Rather, the X-Men have proven themselves to be incredible ciphers for various maligned minorities. The best X-Men films are the ones that lean into this allegorical angle, just compare the triumphs that are “X2: X-Men United” and “X-Men: First Class” to the inept and boring misfires that are “X-Men Origins: Wolverine” and “X-Men: Apocalypse.”

Dark Phoenix has its sights set on allegory. It is explicitly trying to make itself an exploration of how women are suppressed by society, and more specifically, men. This is a notable improvement over the 20th Century Fox’s previous attempted the Dark Phoenix storyline (“X-Men: The Last Stand” anyone?) as it focuses on what made the original comic run so iconic, namely the transformation of Jean Grey from preppy good girl to violent bad girl. Dark Phoenix has all the pieces needed to be a great comic book film and a perfect send-off for one of the longest-running film franchises in the 21st century. But those pieces never come together, and what we’re left with is a desperate last gasp of a waning franchise that feels like a mashup of things we’ve seen executed better in earlier entries.

The real kicker is that this installment isn’t even lifting the best elements of previous films. It would be one thing if we dipped once more into the psychological trappings of “X2: X-Men United” or played around with the heightened style of Matthew Vaughn’s supremely underrated “X-Men: First Class.” Even a re-tread of the now-tired Professor X-Magneto-Mystique three-way ideological debate would have been more compelling. Instead, this is a script as juvenile and shallow as the ghastly “Deadpool” films, with the bland style of “X-Men: Apocalypse,” and a determination to revisit everything fans did not like about the mangled attempt to tell the Dark Phoenix storyline in “X-Men: The Last Stand.”

There are instances where the film threatens to be interesting, maybe even original, but those moments are fleeting and writer-director Simon Kinberg is always quick to push the story back in the direction of formulaic, focus-group pleasing, tedium. Superheroes fighting each other? Check. Battle on the streets of New York City? Check. Lifeless one-liners in desperate need of subtext — “When I lose control things happen . . . bad things . . . ,” struggles Sophie Turner. Check. And let’s not forget the obligatory third-act CGI-schlock-fest that we’ll generously refer to as a final fight. It’s not fun.

What’s worse is that the cast seems to know that it’s not fun.

Jennifer Lawrence (“Red Sparrow”), Alexandra Shipp (“Straight Outta Compton”), and Evan Peters (“The Lazarus Effect”) all give visibly disengaged performances. Veterans Michael Fassbender (“Steve Jobs”), James McAvoy (“Glass”), and Jessica Chastain (“Molly’s Game”) are always joys, but the former two are playing pale imitations of their characters, who were once the heart of this franchise (Magneto and Professor X, respectively). Meanwhile, Chastain, as newly introduced character Vuk, is criminally under-served by the script. In truth, her character probably should have been cut from the film entirely. That leaves Tye Sheridan (“Ready Player One”) as Cyclops, Kodi Smit-McPhee (“Slow West”) as Nightcrawler, Nicholas Hoult (“Tolkien”) as Beast, and of course, Sophie Turner (“Game of Thrones” TV series) as Jean Grey to do all the heavy lifting, and they do try their best, but this is a film too fundamentally broken for them to carry it.

Dark Phoenix suffers from the same issues that plagued early outings of the DC Extended Universe. There’s simply so much happening that nothing is given the time to breathe. It’s a film that’s both overlong and rushed. This is especially strange considering it is the last X-Men film for the foreseeable future. A franchise this well-established shouldn’t need to rush anything. It should be able to take its time and build to a send-off worthy of these characters. But no. The ending of this film comes out of nowhere and amounts to nothing.

Dark Phoenix is allegedly the tragedy of Jean Grey, but the only tragedy is that Fox let their once golden franchise come to this. 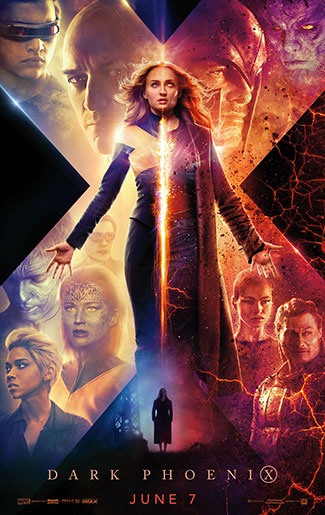