Weddings are to romantic comedies what CGI-heavy final acts are to the superhero genre. They’re the place where emotions culminate, heartfelt speeches are delivered, and true love (almost) always wins out. Part of the reason they’re a natural fit is that these are the days that we start planning from a young age. I can remember daydreaming about the first day of the rest of my life with Mr. Right. These are fantasy’s filled with picturesque locales, gorgeous garments, and guests that are all too eager to be excited about our happy moment. Then we grow up.

For some — like idealist Ben (Jack Quaid, “Rampage”), a man forever in search of the perfect “meet-cute” — that sheen never fades. For others — like recently single Alice (Maya Erskine, “When Jeff Tried to Save the World”) — the endless stream of relationships that have been prematurely aborted at the hands of unfaithful partners has quickly seen to any glamour that fantasy might have once possessed being lost. Regardless of outlook, weddings are gauntlets of social morays, mindless small-talk, and nigh-upon unbearable speeches that is tough with two, and unbearable alone. That’s why Ben and Alice — best friends — when faced with an upcoming spate of nuptials, decide to be each other’s permanent plus one.

It’s a tried and true rom-com premise, that sort of friends-to-lovers story where everyone can see how perfect the pair are together except the partnership in question. Plus One is solidly pitched at the Bens of the world. It’s that right mix of twee charm and light airiness reminiscent of a balmy Saturday afternoon. For the Alices, among which I count myself, this kind of movie is a harder sell. There’s only so long you can spend watching the two leads who ooze chemistry dance above, below, and around their obvious romantic connection before you end up throwing your snack at the screen and screaming “just kiss already.” Luckily for all us Alices, and much to the probable glee of all you Bens, Plus One manages to find freshness in the formula, and proves why it won the Audience Award at Tribeca Film Festival.

Erskine and Quaid do a lot of the heavy lifting here. Luckily, they have chemistry to spare and manage to make the film’s script, penned by Jeff Chan and Andrew Rhymer (both co-direct too), land with more oomph and gravity than perhaps is present on the page. Chan and Rhymer, for their part, do their best to stay out of Erskine and Quaid’s way. What flourishes they do inject are subtle and well-used. Best-man speeches are used as a framing device to transition from one wedding to the next, and they both help keep the film moving and set the tone for each wedding we’re about to land in. The family lives of Ben and Alice are also pleasantly idiosyncratic. Ben’s twice-divorced father (Ed Begley Jr., “Book Club”) is gearing up for his third marriage, which throws Ben’s overly-romanticized worldview into disarray. Similarly, Alice’s mother (a scene-stealing Rosalind Chao, “Tragedy Girls”) is overeager to find her daughter a man, and that enthusiasm does more to hamper her efforts than help.

However, for all of the film’s charming indie-ness — and truly this is a film bursting at the seams with the most lovable aspects of indie film culture — it struggles to maintain its energy throughout. Chan and Rhymer are strong in the preliminary stages of the relationship between the leads, but begin to lose their way when that relationship deepens. Lost for direction they find themselves falling back on tried and true clichés of the genre that, while not unwelcome, don’t lend themselves to the fresh honesty that the film is striving for. Plus One sets out to charm, and charm it does, but in the back half I found myself yearning for the emotional complexities of a James L. Brooks or Cameron Crowe feature, or even just the bite of last years “Destination Wedding,” the conceit of which is shockingly similar to Plus One, albeit with a far more cynical tone.

But all this should be taken with a modicum of salt, I am after all an Alice, not a Ben. That Plus One managed to win me over for any amount of time is a testament unto itself. I can only imagine the amount of fun all you Bens out there are going to have with this. 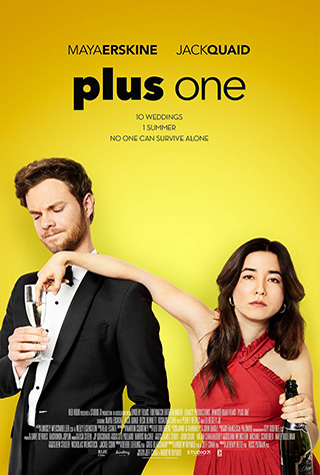