Finally getting a release in English-language regions is Latvian director Aik Karapetian’s follow-up to his grisly “The Man in the Orange Jacket,” Firstborn. Latvia sits between Scandinavia and Russia, so it’s perhaps apt that this stylish, moody thriller evokes some of the black-comic absurdity of the former and the miserablist austereness of the latter.

From the opening dinner party — a tense engagement, lousy with underlying resentment — it’s clear that Francis (Kaspars Znotins, “Still River”) and Katrina’s (Maija Doveika, “The Chronicles of Melanie”) marriage is an unhappy one. After they are attacked by a biker (Dainis Grube, “Welcome to Mercy”) on the way home, Francis’ state of mind goes into freefall. It’s not just the guilt, but the overriding sense that he wasn’t man enough to protect his significant other.

Francis goes to find the culprit — not to kill him, just to purchase an apology from him. The biker winds up falling to his apparent death, resulting in yet more guilt for the stricken Francis. It also results in an unwelcome visit from a mysterious stranger, whose intent is to blackmail Francis and make him commit a terrible crime: From accidental killer to conscious murderer.

All this intrigue is set against the backdrop of Francis and Katrina’s failing relationship. It perhaps doesn’t help that they appear unwilling to turn on their lights, tending to shuffle around in their half-dark apartment, throwing each other hateful glances. It seems their poor kid will be growing up in a grim, sepia cave.

Oh yes, Katrina is pregnant. Charging events with an elemental drone score, Karapetian unflinchingly lunges at the fundamentals of classical male and female roles: The woman as mother and the man as protector. Karapetian enjoys playing with these assumptions through the lens of modern sensibilities, and the regression of Francis — mild, meek Francis — to his baser instincts are tragic and harrowing at times. Katrina feels less like a fully-fledged character, essentially little more than a trigger for jealousy, like Nicole Kidman’s character in “Eyes Wide Shut.” But both actors put in excellent work.

With its ogre-in-a-cave conceit and its snow-dappled setting, not to mention its title, Firstborn is an unashamed modern fairy tale. Karapetian isn’t shooting for raw social realism, but something heightened, even expressionistic. He engenders a palpable sense of tension and dread — an unnerving undercurrent of malice, particularly in the potential for Francis to turn his burgeoning violent intentions against Katrina — even before the film enters more familiar Scandi-thriller territory in the final act.

Virtually spoiler-proof in the way it plays out, the convoluted plot is as far from high concept as you can get, functioning as a vessel for spiraling bleakness. Sadly, an essential sequence involving a home invasion almost botches the last third of the film due to poor editing and unclear scripting. What should have been a key turning point just feels like another tough break for the hapless Francis. It becomes evident that Karapetian’s skills lie in mood-building, and in drawing nuanced performances from his actors, more than crafting effective set pieces.

Still in his mid-thirties, Karapetian shows with his third film that he is an accomplished filmmaker of versatility and thoughtfulness — and, given it was shot in 2017, hopefully we shouldn’t have long to wait for his next effort. Firstborn may not showcase a whole bunch of new ideas, but it is a very competent and persuasive dive into the dark well of the human condition. A slow-burner with a brain, all about the meaning of brawn, it is recommended. 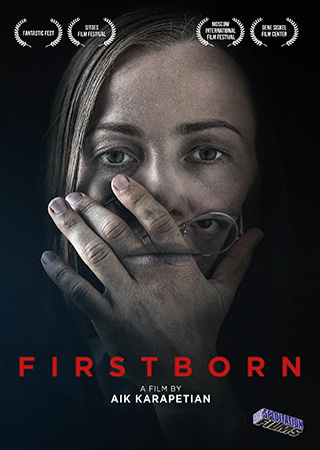