On paper, Changeland has several of the components to success: The movie is set in scenic Thailand, it teases the promise of an emergent bromance between estranged friends Brandon (Seth Green, “Sex Drive,” who is pulling triple duty as director, writer and actor) and Dan (Breckin Meyer, “Ghosts of Girlfriends Past”), and it enjoys the skills of Macaulay Culkin (“Leaving Neverland”). After all, everything is said to be better with Macaulay Culkin in it, even if just as a minor character. The movie, to its credit, does deliver on some of its papered potential.

The choice of Thailand as a place to find yourself is apt. Green takes us through various types of settings as well. They do the whole tourist thing, boat tours and island hopping, and then we get the more secret, secluded side to Thailand. There is peaceful blue waters and seeking enlightenment in waterfalls, before the wild, euphoric night of partying and letting go. It seems almost medicinal in its approach. Feeling down? Think your wife is cheating on you? Nothing like a spontaneous trip with your best friend to cheer you up.

But it is clear that all is not well in the world of friendship.

Brandon hasn’t been a great friend, while Dan has shown time and time again that he is willing to drop whatever he has going on in his own life to be there for his friend. Dan isn’t afraid to call him out on his less-than-stellar friend qualities, and by the end we feel the trip has healed them and their relationship. I enjoyed the intimate and vulnerable display of a male friendship, with Green and Meyer doing a good job of communicating its authenticity.

Then there are the bits that are so contrived it dilutes the better parts. The two are surrounded by others who have come to Thailand to “live life,” as it were. We have Pen (Brenda Song, “The Social Network”) who delivers an abysmal performance as a Thai person (there is a slight twist to this but the pay-off to that joke is not worth the effort) and Ian (Culkin’s character), a guy who bought a boat with his friend and does Thai boxing at night.

Unfortunately, every time Culkin appears, he comes across as awkward and very much just being himself, which doesn’t help in the suspension of disbelief (so much for that aforementioned theory). Minor Asian characters are thrown in for cheap laughs, with an over eager hotel staff and a Thai fighter who inanely repeats the same thing over and over again; the female characters exist merely for the men to develop relationships with them — none of it comes across as meaningful or life-changing like the movie wants us to believe.

Changeland wants to incite in us the view that choice is often a simple thing, that we are the ones complicating things. You either want to do something, or you don’t. Don’t want to live a life everyone else is living? Run away and get a boat. If you aren’t happy with your wife, leave her; it really is that simple (I hope I have communicated my sarcasm effectively).

No Changeland, it isn’t that simple, because you need to deal with the consequence and the fallout. Real life is messy and doesn’t come in a pretty little box. The timeline for this whole self discovery to take root just isn’t possible as well. The trip is only a few days in length and yet Brandon seems so irrevocably changed at the end of it. Change needs time, not just a change in scenery. 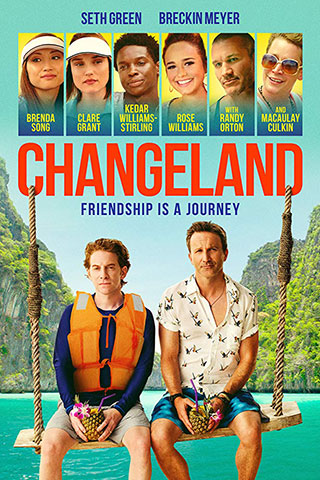