“From the ashes a fire shall be woken, a light from the shadows shall spring.” — J.R.R. Tolkien

A chronicle of a relationship that is no longer nurturing, The Souvenir follows Julie (Honor Swinton Byrne, “I Am Love”), a young film student in London during the 1980s as she navigates to adulthood through a minefield of obstacles. Winner of the Grand Jury Prize at this year’s Sundance Film Festival, The Souvenir is based on the memories of writer/director Joanna Hogg (“Exhibition”) culled from her own vaguely remembered experiences in film school. Cinematographer David Raedeker (“A Christmas Carol”) uses desaturated colors to display tantalizing but only marginally connected images that fleet in and out, giving the viewer the feeling of waking up from a dream and remembering only bits and pieces.

Living with bohemian students in a London flat just across from Harrods department store, Julie’s financial struggles as a student belie her well-to-do background in Knightsbridge, but she has no difficulty calling upon her mother Rosalind (a gracious Tilda Swinton, “Okja,” and Honor’s real-life mom) to ease her financial strain. Vulnerable and unsure of herself, Julie wants to transcend her limited life experience and direct a film about the dying shipbuilding industry in the town of Sunderland, focusing on a working-class family whose sixteen-year-old son has just lost his mother. Her teachers, however, tell her to find a story closer to her own experience.

When raising the question of a budget, someone from film school condescendingly tells her, “I don’t suppose you really have to think about budgets in Knightsbridge, do you?” Julie’s life changes suddenly when she meets Anthony (Tom Burke, “Only God Forgives”), an older man who tells her at a party that “We’re all as real as each other,” a statement that lifts her spirits and draws her to him. Appealing in a pin-stripe suit, the mysterious Anthony tells her that he works in the Foreign Office, but there is nothing to suggest the story is true. Nonetheless, she sees him as a mentor, falling into the bubble she had so much wanted to avoid. When he tells her that she is lost, her mind tells her that she has been found. They go to the opera together, dine at upscale restaurants, and visit the Wallace Collection, an art collection in London.

The collection, which is open to the public, houses an enigmatic painting named “The Souvenir” by the 18th-century French artist Jean-Honoré Fragonard that depicts a young woman with her pet dog, carving letters onto the trunk of a tree. “She’s very much in love,” Anthony says but Julie detects other emotions such as the woman’s determination to make her presence felt. Julie’s relationship with Anthony goes from friend to lover and it is not long before he moves in with her, buys her expensive lingerie, and takes her on a trip to Venice. She remains flattered by the attention she has received, yet her passivity and lack of emotional expression make it difficult to know what she is thinking at any given moment.

Julie’s idyllic odyssey is challenged when she finds bruises on Anthony’s arm but does not give it further thought until Patrick (Richard Ayoade, “The Watch”), one of Anthony’s friends, tells her a disturbing fact about him, something that neither Julie nor the viewer could have imagined. Though confronted with the terrifying revelation that providing emotional support for a damaged person can be a challenge beyond her capacity, she still loves him and remains by his side, keeping a watch for his return each night and amping up her resolve to stay centered while riding a roller coaster of emotions.

Byrne’s understated and mostly improvised performance is a revelation and a perfect complement to Burke’s turn as the charming, but strangely secretive, Anthony. While unreliable as an autobiography, (Hogg says, “It’s harder to now know what was true and what wasn’t”) The Souvenir is a powerful film that will especially resonate with those who may have some painful memories about their own process of growing up. Unlike Alfonso Cuaron’s award-winning “Roma,” which is rigidly structured and literal in its recollection of past events, The Souvenir is intimate, impressionistic, and bathed in a gauzy sense of unreality, yet, in spite of its soft focus, it lives in your mind. As pianist Igor Levit said about music, “It has no limit, it’s like air — you can’t touch it. It only exists within your own imagination.” If you are perplexed, stay tuned, “The Souvenir: Part Two” has just begun filming. 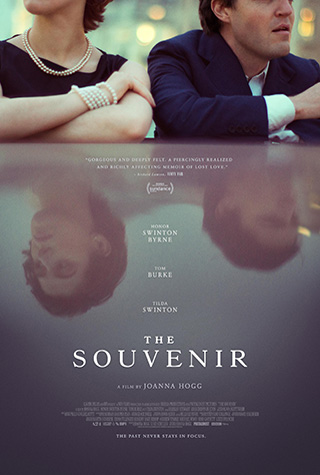