The tragic ramifications of rhino poaching are examined in touching detail by writer/director Toby Wosskow, whose 17-minute dramatic short Sides of a Horn looks mournfully at the human players in this horrific conflict that has pushed an ancient species to the brink of extinction.

With little time to establish the situation and develop a plot that serves the message, Wosskow chooses to focus on South African park ranger Dumi (Welile Nzuza, “Vehicle 19”), who goes to visit his ailing sister and brother-in-law in a township that borders a park. The brother-in-law, Sello (Sherldon Marema, “Chappie”), works hard to provide for his family, but his regular wood-cutting job can’t afford his wife the medical attention she needs.

Dumi pledges to help, but Sello needs cash now and an opportunity has just arisen in the form of a rhino that has been spotted in the nearby park. A local poaching gang that Dumi has already clashed with will give Sello a cut of the pay if he kills the animal and provides the gang with a pristine horn to sell.

It’s perhaps a bit convenient to place Dumi and Sello on either side of the stark conflict this way, but Wosskow wisely uses this polarized positioning to explore the gray area in what would otherwise appear to be a black-and-white situation on the surface. The two men each have noble aims, but both of their journeys point to devastating destinations.

As their paths converge in a suspenseful finale, the conflict is boxed into a corner where there is no room for a happy ending, only different shades of tragedy. The conclusion is a chillingly poignant distillation of the movie’s theme of hopelessness, pitting the brothers-in-law against each other with no easy way out.

Shot on location in townships and game reserves that have been plagued by poaching in real life, Sides of a Horn bristles with natural beauty, visualizing Wosskow’s plea to ponder the significance of what is at stake here.

It is also a powerful condemnation of a problem that extends far beyond South Africa’s borders and yet has a profound effect on its people. Wosskow doesn’t sentimentalize the material or cheaply manipulate his audience to pull them over to his side, but he successfully condenses the conflict into a strong statement about the toll poaching takes on everyone at the ground level. Wosskow’s ability to create an impact with such a compact story is as impressive as its message is important. 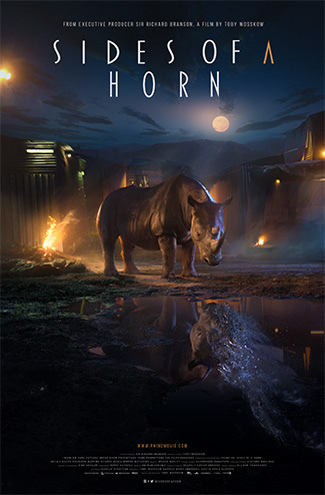