“Strait is the gate, and narrow is the way, which leadeth unto life, and few there be that find it” — Matthew 7:14

Many reports from the aftermath of World War II describe the indifference and, in some cases, outright hostility that the general population in Europe felt towards the Jews, with even lifelong neighbors and friends turning them in to the Nazis. The minority who risked their lives to protect Jews and save them from certain death in the Holocaust are remembered at Yad Vashem in Israel as those “Righteous Among the Nations.” Among the honored are those who took Jews into their homes or properties, provided them with false documents, helped them to escape from ghettoes and prisons, found food and shelter for children who became separated from their parents, or hid Jews in places such as attics, cemeteries, sewers, and even animal cages in a zoo.

Based on the non-fiction book by Diane Ackerman with a screenplay by Angela Workman, the story of two such “righteous” individuals who rescued 300 Jews from the Warsaw Ghetto is told in Niki Caro’s (“Whale Rider”) film, The Zookeeper’s Wife starring Jessica Chastain (“Crimson Peak”). Set in Poland immediately before the September 1939 invasion by German forces that launched World War II, Chastain is Antonina Zabinski, wife of the keeper of the Warsaw Zoo, Dr. Jan Zabinski (Johan Heldenbergh, “The Broken Circle Breakdown”). Assisted by her young son Ryszard (Timothy Radford as a young boy and Val Maloku as the older Rhys), Antonina is seen as the film opens gently tending to her hippos, tigers, lion cubs, and rescuing a newborn elephant in danger of suffocating.

At a party, Antonina socializes with Lutz Heck (Daniel Brühl, “Captain America: Civil War”), director of the Berlin Zoo and Germany’s leading zoologist who plays a major role in the film. Soon after the party, tragedy strikes as the Warsaw Zoo is bombed by the German Air Force, killing most of the animals in their cages and leaving others to wander the surrounding streets. When the Zabinskis allow Heck take some of their highly prized animals back to Berlin for medical experiments, he agrees in return to their offer to start a pig farm at the zoo using garbage collected from the ghettos to provide food for the German soldiers. Unfortunately, this does not prevent Germans from returning to the zoo to kill any remaining animals.

Under the pretense of helping the Nazis, Jan begins working for the resistance, smuggling Jews in their truck under piles of garbage collected from the Ghetto. Amazingly, a member of the German Labor Committee who sympathizes with the Jews provides a special pass for Jan to bring Jews to the zoo where they are hidden in empty animal pens. Among these are sculptor Magda Gross (Efrat Dor, “Mermaids” TV series), lawyer Maurycy Fraenkel (Iddo Goldberg, “Last Passenger”), and Urszula (Shira Hass, “A Tale of Love and Darkness”), a young woman who was raped and beaten by the German soldiers before Jan took her out of the Ghetto in his truck. Though danger is always present, the drama seems to lose its focus when it concentrates on whether or not Heck’s attempt to seduce Antonina will be successful.

The Zabinski’s story is an important and moving one that should be told, yet The Zookeeper’s Wife is a surprisingly bland film that lacks the emotional impact the subject matter demands. Jessica Chastain projects warmth and vulnerability as Antonina, yet her Polish accent seems forced and only distracts us from our involvement with the story. While there are some compelling and heartfelt moments in the film, especially when fear spreads among the animals as they sense the German planes approaching the zoo, the overall execution is often manipulative and mawkish.

There is a scene in which the ashes from the burning ghetto are shown in an overly aestheticized manner, enough to prompt a child to say with wonder that “It’s snowing.” It is a misfire that serves only to trivialize the suffering. While the Zabinski’s courage during the Holocaust will never be forgotten, The Zookeeper’s Wife unfortunately begins to fade from the memory almost immediately after the final credits. 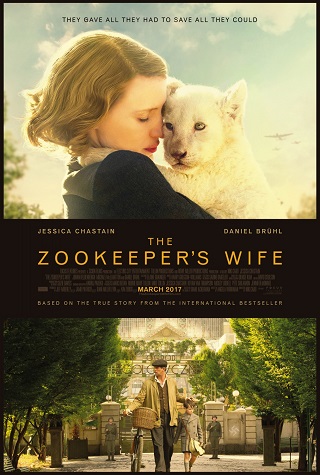