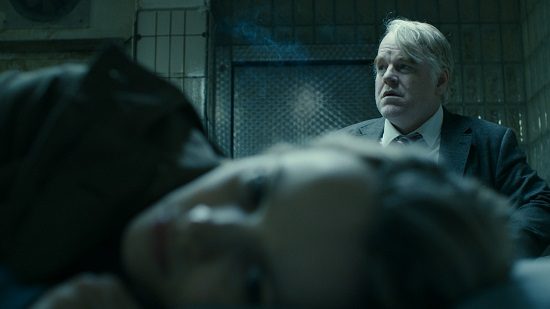 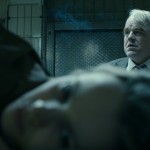 In the late 1990s, Egyptian born Mohammed Atta, whom it is believed was one of the pilots of the September 11, 2001 attack on the World Trade Center, is reported to have established Islamist contact and formed a terrorist cell while a student in Hamburg, Germany. This fact has alerted the intelligence community in Hamburg to be extra vigilant for terrorist activity. In Anton Corbijn’s (“The American,” “Control”) espionage thriller A Most Wanted Man, Günther Bachmann, played by a German accented Philip Seymour Hoffman in his final role, is the tough-minded, hard-drinking head of a clandestine anti-terrorist operation working to find sources that will point them to higher-level terrorists in the Islamic community.

Based on the novel by John le Carré with a screenplay by Australian Andrew Bovell, A Most Wanted Man is a restrained, thought-provoking character study with strategy and mind games replacing multiple deaths and car chases. Shot on location in Hamburg by Benoît Delhomme, Bachmann’s group serves as a counter to ruthless CIA operative Martha Sullivan (Robin Wright) and to German intelligence led by Dieter Mohr (Rainer Bock) who would rather act now and ask questions later. Implicit in their modus operandi is the suggestion that the use of torture is acceptable.

Bachmann, a suspiciously idealistic, rumpled Lt. Columbo-type, who in his previous job in Beirut lost a team during a failed mission, says that his unit is something that “Not many people know about and even less like,” and only exists because “German intelligence needs a job to be done German law won’t let it do.” Caught in the middle is Issa Karpov (Grigoriy Dobrygin), a part Russian and part-Chechen, 26-year-old whom we first see as a bearded, exhausted looking man seeking asylum in Hamburg after being tortured in Turkey and Russia. A Turkish family, Leyla (Derya Alabora), and her son Melik (Tamer Yigit), with whom he is staying, puts him in contact with immigration lawyer and human rights activist Annabel Richter (Rachel McAdams) so that he can make contact with Thomas Brue (Willem Dafoe), the head of a bank in which his deceased father, a hired assassin, deposited large sums of money.

Issa tells Richter that he has a letter from his father as well as a banking “instrument” that will give him access to his father’s money if the bank will honor his claim. Also arriving in Hamburg is Dr. Faisal Abdullah (Homayoun Ershadi), a respected Muslim community leader and fund raiser who preaches against violence, but is suspected of siphoning funds to support a shady shipping company based on Cyprus, known as a front for terrorist organizations. Although Issa claims he wants to turn bad money into good and give it to Islamic charities, the intelligence community is alerted that this huge sum could fall into the hands of terrorist organizations. Soon Annabel is “persuaded” to cooperate with Bachmann who promises that he wants to protect her and Issa who he thinks is innocent. 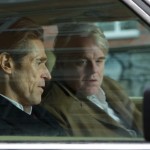 Having been labeled by German intelligence as a dangerous militant, Mohr wants Issa arrested immediately but Bachmann persuades him to give him 72 hours to straighten things out. Acting swiftly, he enlists Brue to help him set a trap for Abdullah. Although the CIA agent talks a good game about “making the world a safer place,” in the intelligence world in which they operate, a world-weary Bachmann knows (or should know) that no one can be trusted. To le Carré, spying is a sordid affair without glamour or nobility and the behavior of the operatives in Corbijn’s work does nothing to dispel that notion.

Though not in the class of the cold war thrillers from sixties that had more recognizable antagonists and higher stakes, A Most Wanted Man nonetheless is an engaging and intelligent thriller with a building tension that escalates as the film moves to its surprising conclusion. Hoffman’s remarkably nuanced and natural performance is the centerpiece and a sad reminder of what we have lost. 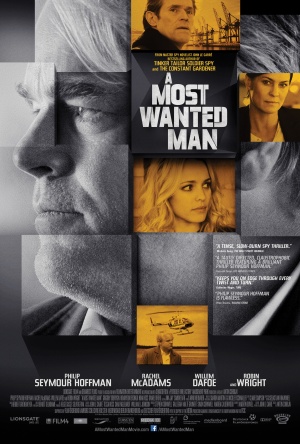