Crimson Peak is one of the most beautifully crafted visual experiences I’ve had in a movie theater in a while. Guillermo del Toro certainly knows how to put together beautiful imagery, whether it’s a fantasy masterpiece like “Pan’s Labyrinth” or a comic book adaptation like “Hellboy.” His movies are amazing to just *look* at, and what’s more — he knows how to pull you into a deep narrative that refuses to let go. His touch is even apparent on movies he only had a hand in helping to produce, like “Mama” and “The Orphanage.” With Crimson Peak, he returns to the writer, director and producer’s chair, and masterfully gives us color and wonder and fantasy in a period piece that’s not quite what you expect it to be.

Set just before the turn of the 20th century, Crimson Peak presents Edith Cushing (Mia Wasikowska, “Only Lovers Left Alive”), a writer trying to be taken seriously and published by Atlantic Monthly. She writes ghost stories based on her own experiences as a child — at ten, she lost her mother to black cholera and was visited by her mother’s dark spirit and warned to “Beware of Crimson Peak.” In voiceover, Edith tells us that ghosts truly do exist, and that later in life, she discovered she was too late to heed her mother’s warning.

As an adult, she meets the dashing Sir Thomas Sharpe (Tom Hiddleston, “Thor: The Dark World”) and is swept off her feet by his intensity and charm. Their courtship is, at first, broken by her father’s disapproval and his sister, Lucille’s (Jessica Chastain, “A Most Violent Year”) mistrust, but they are shortly thereafter brought together in the face of tragedy. Edith and her new husband move to his ancestral home in England, and she learns to live in a dilapidated, yet remarkable palace situated on a mountain above a clay mine. The elements have taken their toll on Allerdale Hall, which boasts a perpetual cascade of leaves through the hole in the roof and rotten wood floors and walls that bleed red clay. Warned not to wander into certain dangerous sections of the house, Edith learns more about Thomas’s and Lucille’s childhood and discovers that ghosts haunt their history as well, and are trying to share their dark secrets with her.

Arguably mis-advertised as a tale of a haunted house of horrors, Crimson Peak is instead a classic Victorian Gothic romance, which might be incongruous to some casual moviegoers. The costume and set design are darkly beautiful, with a particular focus on primary colors such as crimson (obviously), golden yellow, and deep royal blue. Paired with Wasikowska’s pale countenance and the falling England snow, these colors burst off the screen in contrast to the shadowy Allerdale Hall. In keeping with the Victorian Gothic theme, the characterizations by Hiddleston, Chastain, and Wasikowska are hauntingly brilliant — Chastain, especially, evokes an unnerving suspicion from viewers. Mrs. Danvers from the film “Rebecca” comes to mind as a parallel to Lucille’s extreme devotion to her brother. Lucille quietly, menacingly, lurks in the shadows, and her subtle control over Thomas is deeply powerful. At the same time, Hiddleston’s classic Victorian gentleman is captivating in his courtship of simultaneously strong, yet demure, Edith, and she is easily pulled into the Sharpes’ mysterious lives as the classic Gothic damsel in distress.

Unfortunately, the scares in Crimson Peak aren’t the type to stay with you after the film has ended — they won’t even get much of a jump out of you in the theater; the CGI spirits were distracting and surprisingly comical in some scenes. The further into the film you go, the goofier the spirit visuals become. Additionally, the mystery Edith faces is somewhat predictable, but it could simply be my experience with Victorian Gothic that makes the surprises of the film less effective.

Regardless of all of that, however, what’s important here is that Guillermo del Toro and co-writer Matthew Robbins have crafted an evocative masterpiece. One that will hopefully bring some new appreciation to some classic Gothic themes, even despite the lack of the ubiquitous cheesy jump scares of modern horror within. 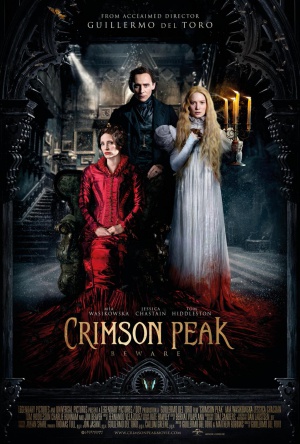