As a lonely child, I gravitated towards Dungeons & Dragons and have always been intrigued with fantasy worlds and the creatures that inhabit them. So finally, after seeing and hearing all the hoopla surrounding Pan’s Labyrinth or should I say “El Laberinto del Fauno” (real Spanish title), I finally got up the nerve to get off of my fat ass and see it. I must say, it wasn’t what I expected.

What I expected was a dark, foreboding fairy tale — basically a 180-degree turn from “The Chronicles of Narnia.” I instead, got a dark, foreboding story about people escaping a fascist regime in Spain (either through imagination or rebellion), headed by one sick, sadistic fucker. It is in these minor escapes, that the story and the moral of Pan’s Labyrinth is told. More evil world, less fantasy realm. Pity.

The good: The acting. Strong performances abound from people you’ve never heard of. The cruel Capitain Vidal is acted brilliantly by Sergi López. His portrayal of a power-hungry, psychopath rivals one the best sociopath portrayals ever — Anthony Hopkins as Dr. Hannibal Lecter in “The Silence of the Lambs.” I found myself cringing at the actions and heartlessness of this creature. Total disdain for his countrymen, his family (except newborn son), even himself. Ivana Baquero, plays the charming and innocent Ofelia. Her wide-eyed wonder of all things, even during times of monstrous distress, was truly something to applaud. It is a crime that older folks have lost the ability to see beyond the walls and are mired in the mess they call their lives. The inner child should never be lost or forgotten. I’ve asked that I get shot up with a lethal dose of methadone the moment I become one of the drones.

The bad. Pan’s Labyrinth looks like it was shot for $150. That in itself isn’t bad, as it great to see what can be created on a limited budget, but the creatures encountered by Ofelia looked like people in bad costumes. I guess I’m just so used to the seemingly limitless ability of computers to produce awe inspiring CGI, that the simple things are now lost on me. Shame on me. The movie also seemed to drag in places. Especially where it shouldn’t drag — during Ofelia’s forays into the magical world. The three tasks bequested to her, almost seemed to be an afterthought. While I should expect action and vivid imagery, I was left with 20 second escapades; just as quickly as the scene started, it ended.

When all is said and done though, I am still going to recommend Pan’s Labyrinth for your viewing pleasure. The story is well told and conceived. You will actually feel sorrow for everyone who comes in contact with the Captain and feel strength in Ofelia when she tries to save herself and her newborn brother from the evils of the world. By the end of the movie, you’ll be actively trying to find your connection with the fairies you pushed away so many years ago. There is no shame in it. 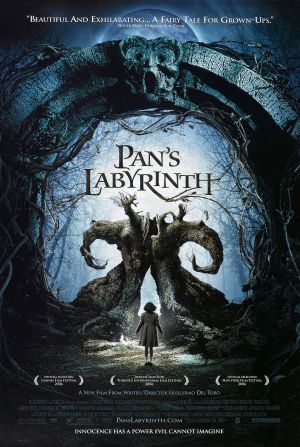