Nicolas Cage character Johnny, blazes the big screen as the Ghost Rider with some intense visual effects and the fight for the balance of good and evil. Wife and I decided to spend the Saturday evening at the movies and of all the choices we had, we decided to go for Ghost Rider as it would be a better choice simply based on the adult entertainment value. I didn’t expect much for this movie, but I was pleasantly surprised by this movie. The previews and the TV spots did not do proper justice.

The film is in three acts, act one is all about the heroes past including his childhood and how the hero gets his powers. Act two is about the emergence of the villain, the hero learning how to control and use his powers and normally, the villain’s discovery of the hero’s weakness. The final act, of course, is the big showdown between the villain and the hero and any thugs associated with the villain. Sound familiar? Normally a comic book adaptation can follow this formula and be a pretty successful movie with the right people working on it. Ghost Rider follows the formula but is not able to quiet cut it with the right ingredients.

The plot is lame, storyline is weak and the acting is miserable. Watching Nicolas Cage in his role was painful since his acting abilities are limited which was covered subtly by some tremendous special effect. There are few things which I really liked about Ghost Rider, however. The special effects — namely the transformation of Cage into Ghost Rider and the skeleton bike blazing through the streets wrecking havoc — are a graphical tour de force. All in all, this is your average superhero movie with great visuals, nonetheless it is enjoyable and satisfying. 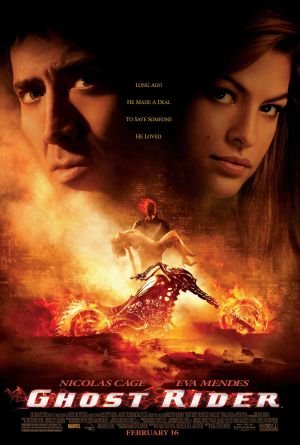