A Taste of Phobia never threatens to touch greatness. But, like all horror anthologies, there are inspired moments and passable individual efforts. You just need to filter out the hairs in the soup. Thankfully, I’ve brought my sieve.

This is a collection of 14 micro-movies, mostly pertaining to body horror. Each short is named for a specific phobia, and they range from around three to five minutes in length. Oh, and according to my highly scientific calculations, this compilation is approximately 37% bad, 42% average and 21% good. So, let’s break that down, starting at the murky bottom and working our way to the slightly curdled cream at the top.

For every well-produced short on offer here, there’s at least one ill-conceived home video with a terrible central actor, and this trend is epitomized by Pharmacophobia (fear of medication). A sickly middle-aged man who doesn’t believe in medication is tormented when his daughter insists he try a new wonder drug. It’s utterly unconvincing, poorly shot and packed with blunt exposition.

Mind you, that short is virtually Kubrickian compared with Coprophobia (fear of faeces), which involves a guy who is fearful of using the lavatory, who then spends three minutes wrestling with a teddy bear smeared in human waste. It’s grotesque, risible, terribly acted and boring.

At least Coprophobia is actually about its titular fear. Mazeophobia (fear of mazes) amounts to the highly original story of a guy getting lost and then being attacked by backwoods hicks. The only thing more annoying than the incessant whistling wind sound is the protagonist constantly speaking his motivations aloud. The ending seems to be reaching for meaning, but it makes no editorial sense.

Politicophobia (fear of politics) reeks of bad student filmmaking; the kind of film everyone made at college before they learned to play nice with the world. A young man rants cringingly to camera about the endless cycle of voting (damn you, democracy!) while strawberry jam drips out of his ears and nose. It’s even worse than it sounds.

In Oneirophobia (fear of dreams), a woman dreams of being dragged through a heavily-colorized 90s music video. A snarling giallo score hints to what might happen to her sleeping boyfriend in the waking world — and it ain’t good. This isn’t a catastrophic effort, but it’s crippled by horrible visuals and a dearth of ideas.

Hunky young things are also front-and-center in Gerascophobia (fear of ageing). While very poorly acted, it does offer a decent concept which wouldn’t look out of place in “Black Mirror.” A male model is anxious about turning 30, so agrees to a deal to swap his consciousness into another body. Careful what you wish for . . .

Nyctophobia (fear of dark) has the reverse problem to Gerascophobia: It’s well-made and well-played, but the idea is dull. It’s essentially the flip side of “Lights Out.” That’s right: When the lights go out, a scary figure appears. So, pretty much what horror films have always done. Truly retrograde.

In Somniphobia (fear of sleep), the protagonist wants anything but lights out. He’s a computer-aided design engineer who hasn’t slept in three days, and needs to get the job done by tomorrow morning. There’s nice montage editing as he tries everything to maintain consciousness, culminating in some desperate self-harming measures. It’s silly and sort of amusing, with a good solo performance.

A similarly skillful performance blesses Mageirocophobia (fear of cooking), in which a woman is tormented by ingredients as she prepares a meal. A carrot becomes a finger; a tomato becomes an eyeball — that sort of thing. (That’s a helluva salad). The comic book framing recalls “Creepshow,” and the bold red and green lighting is pure Stuart Gordon. Excellent makeup and a simple idea combine to create one of the best shorts in A Taste of Phobia.

Astrophobia (fear of stars), meanwhile, couldn’t be more different, tonally speaking. Intense and thoughtful, it concerns a smug guy becoming overwhelmed by realizing the immensity of the universe. The vlogging conceit seems unnecessary (and makes it sound like a Wikipedia reading), and the music video visuals are a bit flashy, but it has a solid theme about a puffed-up man shrunken by existential enormity.

Also mysterious and no less intense is Mysophobia (fear of germs), about a man who goes to obsessive lengths to keep himself perfectly clean. It boasts an astonishing physical performance, and includes some strange and original animated effects, very fine makeup, and a wonderful bio-abstract score.

Covering some of the same skin-peeling imagery is Hemophobia (fear of blood), the story that frames the whole anthology. The frankly far-fetched idea is that a young woman is home alone and getting freaked out by all this nonsense. The big climax involves nude women bathed in blood, and it tries so hard for extremeness that it comes off as laughable.

In summary, few of the films actually explore the fear of their title; rather, most simply exploit them, using them as a launchpad for rote scares. The quality ranges from the execrable to the fairly good, but most settle in the realm of the mundane. As an anthology there are too few innovative ideas in A Taste of Phobia to make it worth sitting through the whole lot. You’re better off seeking out the gems individually — namely, Mageirocophobia, Astrophobia and Mysophobia. Alas, even they don’t shine terribly bright. 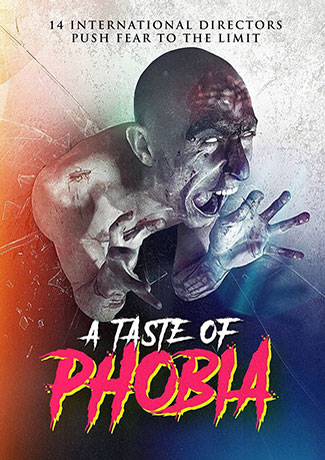