Former marine and single mother Sam (Rebecca Rogers) is on maternity leave. Her baby needs medication, so she leaves the kid home alone and runs to the pharmacy. Sam is abducted. She wakes up in a locked-down warehouse. A mysterious voice informs her that her child will be killed unless she “plays the game.” It’s up to Sam to find a way to escape.

The spanner in the works is that her tormentor is invisible, thanks to some high-tech military gear he’s stolen. There are other captives, too, who are given short shrift, serving only to clarify what will happen to Sam if she doesn’t cooperate with his demands.

Which brings us to the first of many problems with this nano-budget British horror-thriller. While the baddie might be a ruthless S.O.B. when it comes to his other victims, he hesitates to kill Sam herself. It’s like a “Predator” fan film set in rural Warwickshire, and it undermines any sense of existential threat.

The film’s title is Stalked, although in the screener’s credits it’s known somewhat forebodingly as “Unseen.” Well, Sam isn’t exactly being stalked, and the bad guy is only unseen so long as he’s not being filmed. That’s right, this cutting-edge illusory technology has a fundamental flaw: The user is entirely visible when he is filmed through a camera lens. The hunter becomes the hunted, in the most risible way imaginable.

The film is directed by Justin Edgar (“The Marker”). It’s a cheap-looking film with no purposeful style and flat lighting. Crucially, there’s virtually no atmosphere. A sense of place — a sense of space — seems particularly important here because of the nature of the threat, but it’s absent. Most of the film is shot like a videogame: Lots of over-shoulder stabilized shots and circular tracking, as well as some (pretty neat) moments where augmented phone cam footage is matched to the background.

The videogame effect extends to the narrative, insofar as the plot makes no sense. Like playing a game while skipping the cutscenes, great swathes of logic go unheard and, indeed, unseen. Sam herself goes inexplicably unseen much of the time, even when mere feet away from her nemesis, like in a stealth game where a henchman is too dumb to notice the player standing right beside him because his 180-degree vision has been compromised by cone-defined programming.

The film struggles to deliver on any level. The horror element is tame, given the captor’s apparent wish for Sam to survive her ordeal. The action is soft, cumbersome and unconvincing; because she’s fighting an invisible presence, such scenes mostly involve Rogers contorting herself like a dancer limbering up before a show. (It’s a rigorous physical performance, to be fair). After the invisible threat there’s the virtual threat: A CG drone that looks like it’s escaped from a GameCube-era sci-fi shooter.

Finally, as a thriller Stalked doesn’t work because of its unclear rules. The bad guy keeps referring to playing “the game,” but it’s never obvious what the game is, or its purpose. Is he simply trying to highlight the flaws in experimental military technology? We never fully understand why the game is being played. A poorly staged epilogue provides a hint of an explanation — something to do with emasculation and toxic masculinity — but it’s such a generalized trigger that we might as well have been left in the dark.

Leigh Wannell’s “The Invisible Man” is just around the corner and I have faith that he can be more creative with his use of the unseen stalker concept, because Edgar’s film is ill-conceived, clumsily executed and mind-meltingly dumb. There’s nothing here to surprise or excite and — outside of Rogers’ committed performance — you’re missing nothing if Stalked goes unseen. 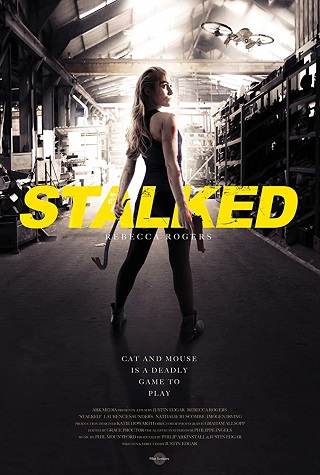