The father of former San Francisco Mayor Jack Shelley once told him, “The day you forget where you came from, you won’t belong where you are.” This advice is not lost on Chris Guthrie (Agyness Deyn, “Clash of the Titans”), a young woman coming of age in Terence Davies’ (“The Deep Blue Sea”) Sunset Song. Adapted from the 1932 novel by Lewis Grassic Gibbon and set in Scotland in the early 1900s, the film is more than a song of sunset, it is a symphony of the fields and lakes and distant mountains of Aberdeenshire and a young woman devoted to the land, harvesting the wheat, lying in the sun, wrapping herself in “the old star-eaten blanket of the sky.” Talking of herself in voice-over, she says, “Nothing endured but the land. Sea, sky and the folk who lived there were but a breath. But the land endured . . . she was the land.”

The gorgeous painterly views photographed by cinematographer Michael McDonough (“Winter’s Bone”), however, does not conceal the isolation felt by those coming up against a system that ostracizes anyone standing against the town’s social and religious conformity. Women especially are at a disadvantage. They have to endure sex without contraception, painful and often fatal childbirth, and marital beatings and rapes that are considered part of the marriage vow, “for better or worse.” The film traces Chris’ growth from an intelligent but passive student to an adult both willing and able to stand up for herself. At first she is seen in school where she is admired for her excellent French pronunciation.

At home things are different, however. The Guthrie farm is run by the patriarch, John (Peter Mullan, “Tyrannosaur”), a sadistic bully who beats his son Will (Jack Greenlees, “Shetland” TV series) for minor infractions such as naming his horse “Jehovah,” and forces his wife Jean (Daniela Nardini, “Sunshine on Leith”) into repeated pregnancies. Both Will and Jean find a way out in vastly different ways, but Chris, having given up any hopes of becoming a teacher, endures her brutal father until he is felled by a stroke. Fortunately, her paternal aunt Janet (Linda Duncan McLaughlin) and Uncle Tam (Ron Donachie, “Filth”) arrive to take her younger brothers back to raise in Aberdeen but Chris carries on at Blawearie, running the farm herself.

As Ma Joad said in “The Grapes of Wrath,” “With a woman, it’s all in one flow, like a stream — little eddies and waterfalls — but the river, it goes right on.” Like the strong-willed Bathsheba of Hardy’s “Far From the Madding Crowd,” Chris never succumbs to her mother’s cynicism about men, falling in love with and marrying a local farmer Ewan Tavendale (Kevin Guthrie, “Barney Thomson”). The scenes where the Ewan and Chris find happiness in marriage and childbirth are the most joyous of the film, especially when Chris sings “The Flowers of the Forest” at their wedding, but, there are signs that it cannot last. When World War I is declared, anyone who doesn’t enlist is labeled a coward, accused of refusing to fight for God, King, and country.

Succumbing to threats from Reverend Gibbon (Mark Bonnar, “Undercover” TV series), Ewan enlists, but the war will change him forever and make him unrecognizable to those who are closest to him. Chris bears her fate in poetic terms, saying, “There are lovely things in the world, lovely, that do not endure, and they’re lovelier for that,” but her positive feelings soon turn to denial. Sunset Song is a beautiful film and a tribute to those who have the courage and patience to endure pain. Though there are many moments when we know that we are in the hands of a master, the film, in spite of its physical beauty and compelling message, never reaches the emotional depth necessary for a truly powerful experience and the haunting music of a bagpipe at the end only suggests the great film Sunset Song might have been. 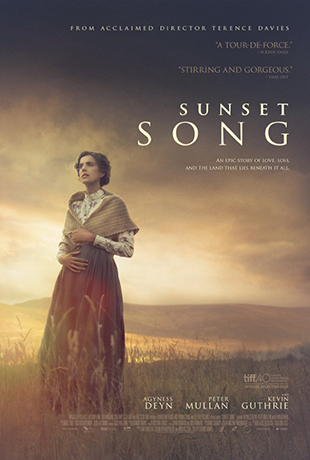