After a night of nookie and a passive-aggressive argument, Adam (Alex Breaux, “Bushwick”) leaves his girlfriend’s apartment and heads into the night. He is promptly stabbed to death. The end.

Just kidding. Adam awakens on an operating table, in a theater belonging to a young, rogue surgeon. Dr. Henry (David Call, “Dark Was the Night”) is ex-military. He’s prone to angry outbursts and he’s lousy with PTSD. He’s also susceptible to indulging experimental drug trials which promise to bring humans back from the dead. He’s bankrolled by smarmy entrepreneur Polidori (Joshua Leonard, “Unsane”) — and as Adam progresses from bamboozled infant to id-driven teenager, their views on how to introduce him to the world become dangerously opposed.

Adam is a mild-mannered monster, built out of thick-stitched patches of skin and a million conflicting urges. He’s incontinent and drooling yet also possessed by an underlying romantic impulse. Some half-memory of love. Polidori’s partner stands by her businessman unapologetically, while Henry’s girlfriend, Liz (Ana Kayne, “Another Earth”), has an aching sympathy for this resurrected charmer.

It’s the first act to Depraved — during which we are in the dark as much as Adam — that is the most effective. Thrust into the light from an infinite darkness, there is a real tension as Adam claws his way back into existence, guided by a temperamental tutor whose motivations may or may not be malign. An added tension is thrown into the mix, as it becomes clear that Henry and Polidori have polarized ideas about how to raise their twisted new child.

While Henry believes in the slow and steady approach, Polidori is keen to hurl Adam into adulthood. After taking him to the Met for a lesson in history and philosophy, Polidori does a one-eighty and introduces Adam to the questionable appeals of a seedy strip joint. A thrill-seeker, Polidori sees his work as “the extreme sports of biology,” and is keen to expose Adam to the raw basis of humanity: The depravity of the title.

Depraved is a smart and slow horror; a justified two hours, low on gore and high on ideas. It successfully brings the Frankenstein story up to date by touching upon contemporary themes like big pharma, exclusive healthcare and drugs regulation. It’s also psychologically complex, exploring the notion of personal identity. There are body horror elements borrowed from David Cronenberg’s “The Fly,” and an icky ethical grayness reminiscent of Vincenzo Natali’s underrated “Splice.”

What the film gains in tricky concepts it loses in consistency. Throughout, Adam’s mental capacity and verbal skill seem oddly variable, which somewhat undermines the sense of a gradual emergence into an alien world. In one scene Adam might struggle with monosyllables, even though we’ve previously seen him monologuing quite happily. At a push one might put this down to Adam deliberately playing on the perceptions of others, although didn’t get a sense of this.

Writer-director Larry Fessenden is a veteran now, so it’s no surprise that the film is well lit and confidently directed. It only occasionally strays into over-stylized territory. There is some slightly shoddy, VHS-era VFX work to represent Adam’s synapse-sparking brain activity. And after all the thoughtful pacing, the finale is cheaply staged, with poor tension management and a needlessly shuffled chronology. Ultimately, the film doesn’t fully cohere, with some contradictory character shifts which feel unsatisfactory.

Regardless, Fessenden’s latest is superior micro budget gem. Eschewing schlock, Depraved is a sensible — almost tasteful — work of thinking man’s horror. It’s ambitious and well made (up to a point); so overloaded with ideas and arguments that it threatens to split at the seams. But up until that last reel collapse, Fessenden’s steady filmmaking holds it together with sureness and intelligence. 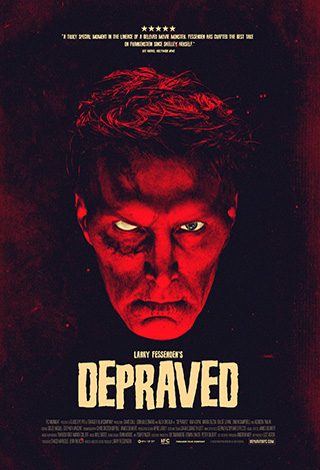