If you haven’t heard of Liam Gallagher, previously of the band Oasis, then you must have been hiding under the largest rock imaginable. He and his brother Noel, were the catalyst behind the incredibly successful band, that is until it all came to a screeching halt ten years ago, traced back to a fateful 2009 Paris concert. This is the moment that Liam Gallagher: As It Was opens on, delivered through the disappointing lens of a video from a fan who was at the concert that never was. The band dissolves, Liam and Noel never reconcile their differences, and both try to move on.

Liam starts a new band called Beady Eye, but the band fails to replicate in any sense what Oasis was. The success of Oasis and its crumbling are the ghosts that haunt Liam, as evidenced with his disappointment at having to play at smaller venues than what he was used to. This descent continues as Liam’s marriage breaks down and his life becomes fodder for gossip columns. There is definite commentary here on how objectified musicians and celebrities are in our society. We revere and admire them, and in the same breath believe we own them and access to their lives.

So Liam falls apart in a very public fashion (on Twitter no less), and as he spirals, he drops from the spotlight to pick himself back up. It’s the classic narrative in the life of a musician — there is the inevitable fall from grace and the slow climb out of the rubble. The interesting thing about the film is that it doesn’t linger much on the fallen state of Liam’s life. He falls and begins his ascent within 30-minutes of the opening, leaving us with an hour of him rebuilding his brand and image as a solo artist. The title may be Liam Gallagher: As It Was, but “Liam Gallagher: As It Is To Be” may be more fitting (although it is really a play on words from his 2017 album “As You Were”).

It is very forward moving, ushering us into the spaces where he creates (the operatic music that underscores this scene is a bit much) the concert in Manchester that brought it all back. It is especially poignant that this happens in Manchester, considering the tragedy that occurred there in 2017. The performance is then a symbolic healing of both Liam and the crowd. These concert scenes are intoxicating to watch, and Liam himself is shown to be lost in the music he is pumping out to the crowd. Music does indeed bring people together.

But it is during the “One Love Manchester” benefit concert that we see the hubris rear its head again. The film chooses to ignore the ugliness that went on behind the scenes, where Liam called Noel out on Twitter for failing to appear at the concert. However, despite not showing us the discord, its presence is undeniable, considering how we never get to hear the music they made together because Noel refused to allow use of Oasis music in the film. So while the film is selling the narrative of Liam starting over, it is clear he hasn’t learned from his past as his vanity leaks into near every moment of the film. I mean, he is a rock star so the vanity is in a way expected, but as a sympathetic subject of a film about starting over, he is simply not relatable.

I do applaud directors Gavin Fitzgerald and Charlie Lightening and their efforts in trying to stitch together a worthy narrative, however, it comes across as more of promotional material for Liam’s latest album due out this month. It just feels a little empty and pointless, and while the concert footage brings with it some liveliness, not even a cameo from David Beckham can compel me to give Liam Gallagher: As It Was another watch. 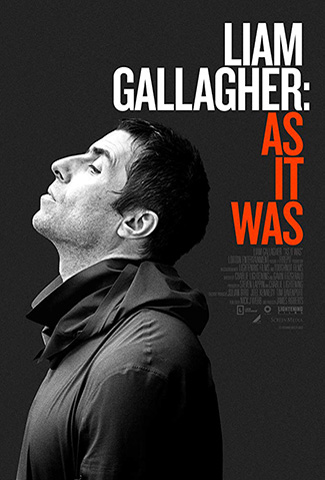