Steven Soderbergh’s reputation as an iconic filmmaker who has retired and unretired multiple times seems contradictory when watching one of his new movies, not merely because the movie exists, but also because his work feels like the product of someone who is always moving, always trying, always doing. Much of his focus in the past several years, however, appears to have been on efficiency, something that he has managed to master in the less glamorous departments of moviemaking, like scheduling and budgeting. He knows how to play the system and he’s often seeking a challenge just to test his limits. This doesn’t always lead to good cinema, but it can certainly yield intriguing results, which is the case with Unsane, his newest movie shot cheaply by the director himself on an iPhone 7.

The iPhone photography looks quite decent, as far as inexpensive options go, but despite the general familiarity many of us should have with the famed device’s camera system, the imagery in Unsane is far more unnerving than comforting. This fits the story of a successful young woman named Sawyer (an all the way committed Claire Foy, “Vampire Academy”), who is still reeling from a lengthy stalking experience that caused her to get a new job in a new city where she doesn’t know anyone.

Sawyer is adept at appearing calm and composed, but the trauma of her experience has left her insides swirling with doubt, fear, distrust, and confusion. She keeps it together at work or at the bar, but the memory of her stalker still haunts her. Desperate for an escape from the psychological attacks that she’s suffering, Sawyer looks up a support group for stalker victims, which leads to an initial interview with a counselor at the hospital where the group meets.

Everything appears normal until Sawyer is suddenly carted off to a locked room that houses long-term patients of the facility. She’s convinced that there’s a mix-up, but the hospital staff are unresponsive to her pleas. It’s here that Soderbergh’s iPhone plan proves most effective, because the hospital room’s large, open spaces and outdated equipment adopt a grim, sinister appearance in the crisp, flat visuals the handheld device provides.

With Sawyer now committed, the movie broaches the question of whether the facility really has made a mistake or if the protagonist has actually become mentally unstable as a result of her trauma. It’s standard territory for a psychological thriller, of course, and Soderbergh is happy to indulge many of the usual tropes that come with that territory, but oddly enough, he never seems particularly invested in the mystery quotient of the story.

Even though he still drags out the definitive answer to the question for a while, he makes little effort to hide that he favors the theory that the facility is keeping a sane Sawyer locked up as part of a nefarious insurance scam. This splits the movie’s focus in two, either chronicling Sawyer’s ongoing experience in the eerie hospital or going behind the scenes of the facility’s operation to show staff members discussing things in hushed tones.

The more dramatically potent side of the story is clearly Sawyer’s arc, which is given several boosts by Foy, who is absolutely tremendous in the role. She lends her character a toughness and resiliency that appears at the very start and doesn’t diminish as her days trapped inside the hospital wear on. And yet she still brings a very real vulnerability to the role that a lesser actor might have played as weak timidity. Sawyer is a fighter and she’s not going to give up, not in the face of her stalker or in the increasingly maddening and hopeless situation the hospital staff are putting her in, but that doesn’t mean that her trauma hasn’t left deep scars on her psyche.

Unsane is at its best when it’s dedicated to being a story about a woman’s pain and her valiant efforts to overcome it. Foy’s performance is multi-layered in a way that shows the various layers to be all sandwiched together, so that she’s not merely playing different sides of a character in different situations, but rather illustrating convincingly how all of those different sides integrate with one another to create a complete portrait of a person.

While the movie would probably work even better if it were content to simply tell Sawyer’s tale, the evil hospital’s shenanigans bring a balance to the story that is intriguing in its conspiratorial excitement and arguably more purely Soderbergh overall. The director has often been highly critical of the establishment, having made movies about casino heist professionals, American politicians embroiled in the drug war, feisty reporters taking on big industry, shlubbish whistleblowers, assassins backstabbed by their own organization, and redneck thieves aiming for a big score.

His latest continues this tradition using a plot that vacillates between far-fetched and frightening with prescribed doses of cynicism and paranoia peppered throughout. There’s a strong sense of distrust in the system, any system, to protect the citizens that most need help. This in turn folds the hospital’s storyline back on top of Sawyer’s, since the protagonist does everything she can to escape her stalker and finds that the few measures put in place to help her have only failed her instead.

As the movie rushes wildly into a violent, disturbing third act that teeters on the edge of ridiculousness, Unsane becomes sillier than Soderbergh perhaps intends, except the director keeps filtering all the developments back to Sawyer and the theme of her trauma, which affords Foy many more moments to cut a deep impression into the movie’s digital surface. Soderbergh seems to be both rushing to wrap up the story and eager to stuff every thriller cliché he just suddenly remembered into the final few minutes. The end result isn’t exactly clean, but it is clear that Soderbergh’s efficiency remains energized and Foy is a force to be reckoned with. 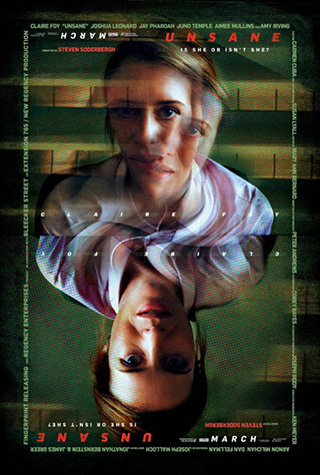