As audiences screamed and jumped in the mostly silent screenings of “A Quiet Place” over the weekend, I found myself facing a pregnancy-related horror film of a different type. Leena Pendharkar’s 20 Weeks follows a young couple as they deal with an unplanned pregnancy and then subsequently with the baby having a physical disability and potential genetic disorder, both of which are discovered at the 20-week mark. The extent of these possible birth defects requires additional and sometimes invasive chromosomal testing, and even then, the results are far from conclusive.

Maya (Anna Margaret Hollyman, “Mr. Roosevelt”) and Ronan (Amir Arison, “The Blacklist” TV series) are cool and stylish Los Angeles-based creatives, verging on stereotypes as they stalk the Silver Lake sidewalks and parks and children’s birthday parties of the Holofcener or Duplass universe. I mean, Ronan (unironically) wears at least two different fedoras! However, the California setting also serves a more practical purpose as one of just a handful of states allowing for the termination of a pregnancy through week twenty-four.

The protagonists are provided the prognosis in a series of doctor visits where complex medical jargon and life-altering decisions are bandied about, not cavalierly, but with the precise objectivity only a medical professional can convey. Such scenes capture the abject horror of laypeople, who not only lack medical degrees, but have also just received incomprehensible news and now must act on it. They rightly struggle with processing the information given the abundance of unknowns. They are nearly paralyzed by the weight of it, knowing that there is no right or wrong answer, and whichever path taken will inevitably impact the rest of their lives, often in untold ways.

All this information lives and breathes in Ronan’s and Maya’s shared scenes, in their fights and in the ways they come back together. And yet still,
20 Weeks holds its audience at an emotional distance. They are on this roller coaster, and we can only watch from afar. Such is the burden of parenthood and the deeply personal decisions that accompany it. Unless you have been there, no one can truly understand the magnitude of this struggle. I certainly can’t, and the film doesn’t need you to understand. It just asks that you hold back on those inane and invasive questions about weight gain and instead simply listen, empathetically and without judgments.

Through flashbacks, which are mostly differentiated by the presence/absence of Ronan’s facial hair (the fedoras exist in every timeline), we learn of his enthusiasm over having kids. Maya is more reticent, asking obvious questions of “how will I continue to work?” and “who will handle middle of the night feedings?” This is purely anecdotal, but we often hear that the fact of having a baby becomes real for the mother almost immediately. She has nine (but actually ten!) months to build an emotional connection and process the weight of this decision. Meanwhile, men tend not to develop that deep bond until the baby is born and his or her physical presence is felt. 20 Weeks takes care to develop both characters’ journeys in equal measure.

The film is structured in stages much the same way that pregnancy is counted in weeks and a baby’s developmental progress is charted in (organic) produce comparisons. The narrative flips between past and present, and even future, with self-assured perplexity. Like its characters, the film is temporally-challenged, playing out of order in symbolic referentiality to their out of cohesiveness. And it feels much longer than its 89-minute runtime implies. These narratively derivative time jumps, which further reinforce the inaccessibility of the characters, are arguably manipulated to confusing and overly dramatic effect. Life doesn’t unfurl that way. The world only spins forward. We cannot see the future or know how something will turn out. Each day, minute, second will be a surprise. That is its blessing and its curse.

The most compelling scene occurs early in the film, and even earlier in the characters’ timeline. In deciding whether or not to have a baby, Maya poses baby-related questions to Ronan with a cadence not dissimilar to wedding vows: “Are you going to be there when I feel like crap in this pregnancy? Are you going to let me take mornings off so I can still write after the baby’s born? And are you going to like wake up in the middle of the night for whatever reason the baby needs?” This tender, unexpected moment — wherein all her smallest and greatest fears are vocalized — was only slightly undermined by the proposal that immediately followed, and still made for one of the least grand and most romantic gestures I’ve seen on screen. Once again, Pendharkar opts for the ordinary over the exceptional.

For a film featuring a marriage proposal outside the doors of Planned Parenthood, 20 Weeks is surprisingly apolitical, and focuses instead on the often boring minutiae of pregnancy. We accompany Maya and Ronan on weekly check ups, ultrasound and amniocentesis appointments, registry sessions, baby showers, and disagreements over names. Screenwriter and director Pendharkar clearly doesn’t want to enter into a debate about reproductive rights. She’s made her choice in the form of crafting a personalized, individual story on the smallest possible scale. By narrowing her focus to the microscopic, she enables a conversation about this emotional and topical subject matter. Conversations of which, Maya and Ronan have many with varying degrees of combativeness. One assumes Pendharkar is pro-choice and, thus, gives her characters the space to make them, all while neatly avoiding the compulsion to prosthelytize. 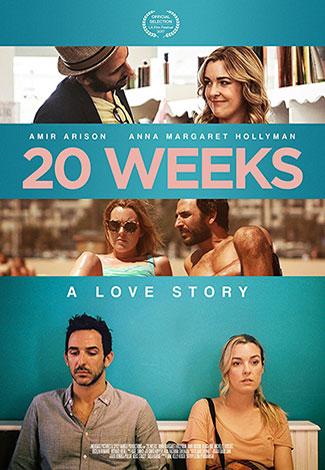