Mr. Roosevelt is a quirky comedy written, directed by and starring comedian Noël Wells (“The Incredible Jessica James”) and is about a struggling funny person who travels from Los Angeles back to her old stomping grounds in Austin, Texas when a loved one falls ill. While there, she has the misfortune of staying with her ex-boyfriend (Nick Thune, “Dave Made a Maze”) and his new girlfriend (Britt Lower, “Sisters”), who seem to have their lives in perfect order.

Usually, when the term “quirky” is appended to a movie people get a little antsy. It’s almost a pejorative. Quirky movies are whimsical with a dash of drama, slight films that, when not done well, come off as annoying and trite. Mr. Roosevelt isn’t one of those movies, though. It positively reeks of sincerity and familiar humor. You believe in the travails of Emily (Wells) because she’s just so darn relatable.

Emily’s claim to fame in L.A. isn’t that of a stand-up comic, or an improv performer, or any of the so-called mainstream comedy gigs. No, she’s more of a YouTube star. And “star” is pushing it; even though her videos have garnered millions of views, she hasn’t really been able to monetize them. So she’s relegated to paying bills by being a video-editor freelancer for a guy played by Doug Benson (his character’s name escapes me, and IMDb is no help; it’s not important, really). But when she hears about the critical illness of someone near and dear to her heart, she’s on the plane back to Texas.

Which is where she meets up with Eric (Thune), once an aspiring musician, with whom Emily broke up via text after she moved out to California. Now he’s moved on, albeit in the same house they shared when they were a couple. Now he’s with Celeste (Lower), who’s so completely put together that Emily finds it tough to be irritated by her.

In fact, as Emily is introduced to friends of Eric and Celeste, she notices that everyone else seems to have things going their way in life, that everyone has planned and organized and thought about their future. This is in stark contrast to Emily, who doesn’t even know how she’s going to get back to California, let alone what she wants to do with herself regarding long-term employment. Then she meets — by physically running into her, of course — waitress Jen (Daniella Pineda, “The Detour” TV series), who offers support to the stressing-herself-out Emily. Jen’s outlook on life is a bit more bohemian than that of Eric or Celeste, striking a medium between the controlled predictability of their lives with the uncontrolled stagnation of Emily’s. It’s a new friendship!

I realize this all sounds kind of maudlin. It’s not. Wells isn’t an oddball in the vein of Greta Gerwig’s stock character; she’s someone you probably have in your life right now. She’s normal, just flustered and aimless. These aren’t oddball traits. She’s very funny, especially when she’s not trying to be. She’s charming, and she’s by no means naïve or simple. She knows what’s what; she just doesn’t know what she wants. Jen’s influence is a good one in this regard, and it allows Emily to conquer her own anxieties.

The final verdict is that although there are some cringe inducing moments, Mr. Roosevelt is one funny film. Way better than I had expected, since you really don’t know what you’re getting with an unknown (to me) cast. Wells proves here that she’s very talented in all three of her roles — a strong onscreen performance, a solid directorial effort, and a witty, sincere scriptwriter. 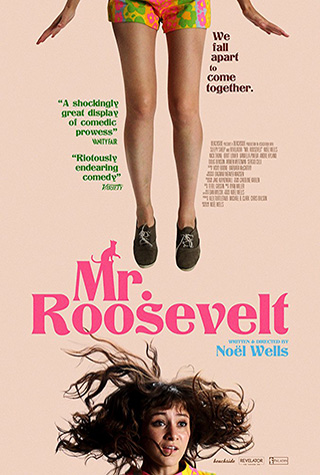