I watched Support the Girls right on the heels of “We the Animals” and “Crazy Rich Asians,” and it requires no stretch of the imagination to view this coincidental triple-feature as three distinct and distinctive representations of the meaning and function of family. The employees of Double Whammies — particularly the young, attractive, well endowed (or at least push up bra-invested) waitresses — are not biological family or even a chosen family of dear friends, but the sort of family that gets cultivated and fostered in a workplace environment where shared experiences and a common, if temporary, goal can form a common, if temporary, bond.

Double Whammies is a family place, placing a premium on respect, responsibility, and sisterhood. It’s a place where scantily-clad employees wash cars before their shifts to raise funds for one of their own in trouble with the law after an incident with her shitty boyfriend. It’s a place where waitress Danyelle (Shayna McHayle) can bring her sick son to color in a corner booth while waiting for the only other black waitress (unofficial policy dictates they cannot work the same shift) to babysit. Like a good push up bra, these women are here to support each other. And while Support the Girls opens with the general manager of the Texas-based “breastaurant,” Lisa (Regina Hall, “Girls Trip”), crying in her car, it manages to avoid lazy clichés and stereotypes about women in the workplace and particularly the kinds of women working in this kind of place.

Once Lisa dries her eyes, it is time to interview and explain the particulars of a “sports bar with curves” to potential new hires. Maci (Haley Lu Richardson, “The Edge of Seventeen”), her enthusiastic sidekick, girlishly sips a pint glass of chocolate milk with a straw and fills the new recruits in on the tricks of the trade, or as Lisa admiringly advises, “Learn from the master. There’s an art to this.” In one of the funniest scenes, Maci (the “i” of her name tag dotted with a heart) mimes an interaction with a customer (played by one of the trainees) explaining the importance of prolonged contact, laughing with an open mouth and, most importantly, the value of the up-sell. The waitstaff operates under a series of rules called “the four Be’s,” but Maci’s methods typify the real rules, tried and true techniques to exponentially increase one’s take-home tips.

Lisa is a manager in the truest sense of the word. She is a problem solver who spends each day putting out a series of fires at work, whether that means freeing and then capturing the petty thief trapped in the air duct, getting the televisions back online, or cleaning puke out of the bathrooms. Overworked and taken for granted, Lisa does everything in her power to keep the Double Whammies family together, even as her personal life is falling apart. During an argument with her husband (Lawrence Varnado, “Sin City: A Dame to Kill For”), she frankly explains how his ineffectualness has become their undoing, “I can take fucking up all day, but I can’t take not trying.” Lisa is also a master of up-selling. Although, she redirects her energy from the customers to her girls, constantly building them up and telling them they deserve better. She is a manager faced with the fact that she can’t manage the lives of her employees — or even her own — beyond Whammies’ doors.

Writer and director Andrew Bujalski, like Lisa with her cute heart stickers from the smoothie place across the way, covers his film in love and compassion. And just as the girls with their customers, he expertly wields the tools at his disposal. Most notably among these is Hall, who is the glue holding Double Whammies and this film together, while drawing support from a cast of endearing young colleagues. Support the Girls is funny without making fun. The lone exception being the girl Lisa must fire when she turns up with a tattoo of Golden State Warrior Steph Curry across her ribcage. Though even she gets the last laugh by grabbing a few fifths of whiskey on her way out the door.

Curry’s number one fan isn’t the only employee Lisa has to let go this day. Double Whammies has rules that must be followed, first among them is: “No Drama.” Such a missive could also be applied to the film itself, which features a dramatic narrative arc while avoiding overwrought interactions or set-pieces. No one is over the top in their cruelness or misogyny or naivety. The characters feel grounded in reality, and the only drama is that which the real world eventually sows. There are, of course, the obnoxiously drunk and sexist customers, but most are harmless regulars like Bobo (Lea DeLaria, “Ass Backwards”) or Jay (John Elvis, “Under the Dome” TV series) from the neighboring electronics store or men just there for the game. The owner (James Le Gros, “Wildling”) cluelessly navigates issues regarding diversity while also justifiably worrying about the liability of interviewees contributing to an unsanctioned car wash, but he’s not a complete pig.

And that’s precisely how patriarchy functions — as a series of microaggressions and value judgments that manipulatively twist women into upholding the systems in place instead of each other. These women are the frogs in that proverbial pot of water. The heat rises, the tension builds, and eventually something has to boil over. This film has incredible heart and empathy and highlights women’s capacity for love and acceptance, and yet is ultimately one about anger. “No Drama” has become code for not losing one’s cool, not crying at work, not being difficult or freaking the f@%! out. But Bujalski’s film shows just how cathartic and (maybe even) empowering communal hysterical female rage can feel; whether slinging wings at Whammies or its corporate competitor Mancave, Lisa, Maci and Danyelle are just there for the fight. 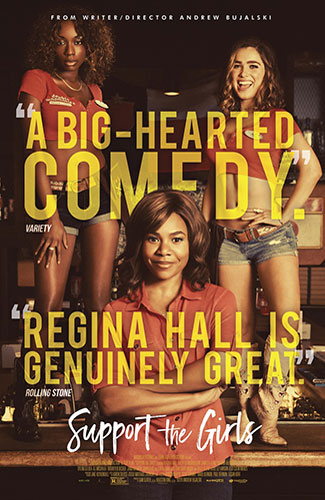