Not all high school movies are the same. But if you were to map out the archetypal characters based on the films of the last thirty years, you’d probably come up with a list close to this one:

In The Edge of Seventeen, our unpopular main character is Nadine (Hailee Steinfeld, “The Homesman”). Krista (Haley Lu Richardson, “The Bronze”) is her only real friend, and the two fall out when Krista starts dating Nadine’s loathed older brother Darian (Blake Jenner, “Everybody Wants Some!!”). The subsequently friendless Nadine starts to spend her lunchtimes in Mr. Bruner’s (Woody Harrelson, “Now You See Me 2”) classroom; their initially combative relationship thaws into a begrudging friendship. Erwin (Hayden Szeto, “Fortune Cookie”) sits by Nadine in Mr. Bruner’s class and silently worships her, but she only has eyes for the beguilingly aloof Nick (Alexander Calvert, “The Blackburn Asylum”).

Let me break it down further. The first thing that raises The Edge of Seventeen above the glut of similar films is Hailee Steinfeld. She attacks her role with a charismatic petulance, making Nadine smart and funny, prickly and rude. She’s likable, not because she’s perfect (she’s very much not), but because she feel so palpably real in all her self-centered naïvety. In her most vulnerable moments you just want to reach through the screen and give her a hug.

The best scenes are those shared by Steinfeld and Harrelson. Again, the “teacher friend” is not a new character, but Harrelson makes him seem like a person, not a stereotype. Harrelson and Steinfeld have a lovely, familial chemistry. Their repartee is so much fun and the way their relationship develops through the film is well-paced and satisfying.

The other standout in the impressive cast is Hayden Szeto as the endearingly gawky Erwin. In real life he’s more than a decade Steinfeld’s senior, but this isn’t noticeable in the film. He nails the emotional and verbal ungainliness of the teenage boy; it makes sense that his Erwin would be so besotted with the far more confident Nadine. The dialogue they share traverses a minefield of accidental woundings and hurt feelings, but it remains unyieldingly funny.

First-time writer/director Kelly Fremon Craig is wise in her treatment of Nadine. At least to begin with, we see the world solely through her eyes. When Krista begins dating Darian, it feels like a betrayal. You sympathize with Nadine that her mum Mona (Kyra Sedgwick, “Time Out of Mind”) seems to obviously favor Darian over her.

As the film progresses though, it becomes increasingly clear that most of Nadine’s problems stem from the fact that she is selfish. She isn’t ever vilified for this, but she is called out on it. There’s an acknowledgement that teenagers are naturally narcissistic, it’s almost a rite of passage, but that doesn’t make it any easier for those around them.

The empathetic treatment of all the characters, sparky dialogue, and winningly human performances are what makes The Edge of Seventeen so worth watching, despite the familiar ground it covers. The teenagers of 2046 will revere this film the way my generation revere John Hughes’ back catalog. Mark my words. 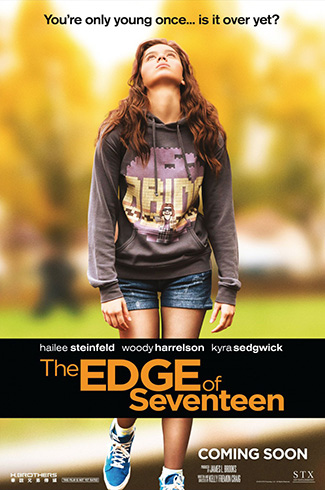