Jess (Katee Sackhoff, “Oculus”), a reformed drug addict, is trying to reclaim her daughter Chloe (Lucy Boynton, “The Blackcoat’s Daughter”) from the children’s home. Chloe, still angry at the desertion years earlier, is in no hurry to return to her birth mother. Yet one night, after an adventure gone wrong with her boyfriend, Chloe becomes convinced she is haunted by the evil spirit of an old woman that she terrorized as a youth. When her boyfriend goes missing, she agrees to stay with Jess and, despite their past wounds, decide to work together as best they can to free Chloe from the spirit’s clutches.

Sounds intriguing, but Don’t Knock Twice is so derivative, at times it’s laughable. There isn’t one element of this film that hasn’t appeared in at least twenty others. The generic eastern-European curse, the strained parent-child relationship, the spooky knocking, the monster that disappears when the lights are switched on; if there’s nothing new under the sun, then there’s even less new in this Caradog W. James directed horror movie.

Nevertheless, sometimes the film does manage to elicit fright simply by the sheer weight of horror tropes it piles on. The best example of this is early on, when Chloe’s boyfriend, Danny (Jordan Bolger, “The Habit of Beauty”), is whisked away by the spirit. The lights turn off one by one down a long spooky corridor. Scary figures zoom past the very back of the shot. There are numerous jump scares. Danny is pulled into the air by the invisible force. Though the amount of scare tactics does stink of desperation, it’d be dishonest to deny the effectiveness.

But the quieter moments work better. You will not want to eat Carrot and Coriander soup for a good long time after watching this film. Neither will you want to stand directly on top of a manhole cover. These glimmers of talent and innovation are frustrating because they point to a more interesting film hiding very deep beneath all the cut-rate imitation.

However, while everything around them is a swirl of pile-on plot points and ridiculousness, Katee Sackhoff and Lucy Boynton manage to ground much of it with their genuine performances. Both have been in better horror films — and will undoubtedly go on to even better ones — but they do lend this film some much needed gravitas. The quality of their work is accentuated by the weakness of the supporting characters (like family friend played by Pooneh Hajimohammadi, “The Machine”), whose line readings are flat and awkward. Sackhoff and Boynton are better than this film, but thankfully they also make it better.

When a film has a plot as uninvolving and derivative as this one, you have to wonder why it even got made. Why make something that is a lesser version of so many other things? What’s the point? After the credits rolled (after a final surprise that left me shrugging), I was still none the wiser how it had stumbled into existence, and why no one had bothered to help the movie further. Don’t Knock Twice isn’t awful; the two lead actresses and a few scary scenes manage to prevent it from lumbering into the realm of embarrassment. But there are so many films that do what this film does, so much better. There’s no reason, therefore, to knock once, let alone twice, on the theater door to see it. 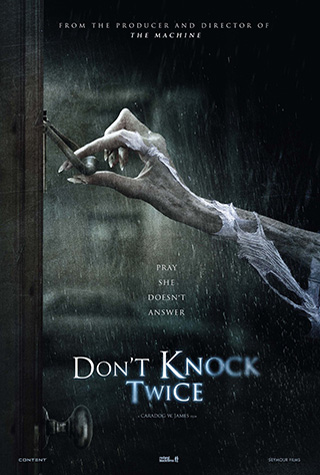