Slice-of-life drama is rarely cut so narrowly as it is in Kelly Fyffe-Marshall’s quietly devastating short Haven, about a mother (Tika Simone) and daughter (D’Evina Chatrie) wiling away the hours until a dark secret is suddenly unearthed. This isn’t even a slice; it’s a sliver. The short clocks in at approximately four minutes in total length, but even that includes some credits, so the story is actually packed into less than 200 seconds.

What’s impressive is that Fyffe-Marshall succeeds in establishing a convincing and believable world for her two characters in those mere couple of minutes. Mom is chatting on the phone while her daughter can be seen in the background playing with some toys. Eventually, the daughter joins her mom by the couch so that she can have her hair brushed.

It’s all as simple as that. There are no other locations, no glimpses of anything outside their apartment, no other characters except the friend on the end of the phone line, no distractions to divert one’s attention in any way at all. A synopsis of the story can’t be stretched any further than what I’ve provided above. This is as barebones a plot as any you’ll find in narrative cinema.

But there’s a twist lurking around the corner that the whole movie, all three minutes and change, is leaning towards, hinging its dramatic impact on the ability of Fyffe-Marshall and her two actors to land the heavy moment. The simplicity of the setup (as in all setups, from the camera to the apartment location to the story) marks a deliberate effort to establish a clear sense of normalcy only for Fyffe-Marshall to capture how quickly it can all come crumbling down.

Without spoiling the twist, there’s only so much that can be written about Haven, because the reveal is the entire point of the story that Fyffe-Marshall wants to tell. The acting is certainly strong, with both performers evoking a naturalism that allows the movie’s ending to sneak up on us and, most importantly, feel entirely authentic.

Haven shines a light into the dark places that we don’t even think about because we simply don’t know they’re there. Fyffe-Marshall offers no resolution or even much in the way of answers, so the movie’s main theme is more murmured than explored. It’s all about the tragic shock of the surprise ending, which risks making the movie feel more gimmicky than honest. Despite this, there’s enough truth in the story to leave you pondering how little one can know about others’ situations and how much can be revealed in literally just a few minutes. 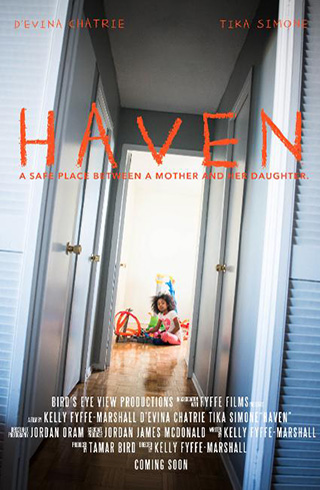