“Because I could not stop for Death,
He kindly stopped for me;
The carriage held but just ourselves
And Immortality.”

Whether or not Dickinson stopped for life, it kindly stopped for her and her immortality is enshrined in the legacy of the 1800 exquisite poems she left, only ten of which were published during her lifetime. She did not leave any commentaries to interpret her work, but left them for us to understand and explain. One interpretation of her life and work is provided by Terence Davies in his film A Quiet Passion, a sympathetic but overwritten and curiously wooden look at her life and the influences that shaped her art. Starring Cynthia Nixon (“Sex and the City”) as Emily, Davies traces Dickinson’s life in a standard linear format. Raised in the Puritan New England city of Amherst, Massachusetts (the film is shot near Antwerp, Belgium) the poet was lonely and secretive throughout her life, seldom left home, and visitors were few.

She stayed with her family all of her life, living through births, marriages, and deaths but always setting aside the early morning hours in her study to compose. Bright and outgoing as a young woman, Emily is portrayed as becoming more isolated, and bitter as she grows older. Her only companions were her austere and unforgiving father, Edward (Keith Carradine, “Ain’t Them Bodies Saints”), a one-term Congressman, her haughty brother, Austin (Duncan Duff, “Wild Target”), who became an attorney and lived next door with his wife Susan Gilbert (Jodhi May, “Defiance”), and her younger sister, Lavinia (Jennifer Ehle, “Fifty Shades of Grey”) who was her greatest solace. As the film opens, Emily is tagged as an outsider almost immediately. As a young student (Emma Bell, “Final Destination 5”) at the Mount Holyoke women’s seminary, she stands up to the governess by declaring that she does not want either to be saved by divine Providence or forgotten by it and also speaks out for feminism, women’s rights and abolitionism.

Her willingness to challenge conventional thinking by dismissing Longfellow’s poem “The Song of Hiawatha” as “gruel,” and her support for the poorly-regarded Bronte sisters was not appreciated by her family. “If they wanted to be wholesome,” she retorted, “I imagine they would crochet.” As Davies cleverly morphs the faces of Emily and her well-to-do family from children into adults, a clearer picture emerges of her relationship with her strict father and reserved mother (Joanna Bacon, “RocknRolla”). Her only refuge from family conflicts and disappointments was her intimate relationship with Vinnie, the companionship of her best friend Vryling Buffam (Catherine Bailey, “House of Anubis” TV series), and the sermons of Reverend Wadsworth (Eric Loren, “Green Zone”). Irreverent and provocative, Emily, Vinnie, and Vryling are shown walking through the gardens, exchanging witty aphorisms while they twirl their parasols, but the element of artifice is overbearing.

We do not see Emily in the process of composition but listen to her poems read aloud in voiceover. They are the highlight of A Quiet Passion, but there are not enough of them and too much time is spent on Emily’s sad physical deterioration as she confronts the debilitating Bright’s disease. In this regard, there is no subtlety in the film’s presentation as the camera unnecessarily lingers over Emily’s shaking fits for an inordinate length of time and her last days are an endurance test for the audience. In spite of the family’s strong religious approach to life, there is no reflection about her life and legacy or talk about life’s meaning and purpose.

Though Emily Dickinson’s poetry glimmers with a spiritual glow, the uniqueness of who she is does not fully come across. For all of its fine performances and moments of comic satire, A Quiet Passion is dramatically inert, and its stilted and mannered dialogue is an emotional straitjacket with each character talking to the other as if they were reading a book of aphorisms. Terence Davies has directed some memorable period films in his career such as his remarkable adaptation of Edith Wharton’s “The House of Mirth.” A Quiet Passion, however, has neither quiet nor passion. Gratitude must be offered, however, to Davies for introducing the poems of Emily Dickinson to a wider audience. Thanks Terence and thanks Emily.

“You left me, sweet, two legacies,
A legacy of love
A Heavenly Father would content,
Had He the offer of;
You left me boundaries of pain
Capacious as the sea,
Between eternity and time,
Your consciousness and me.” 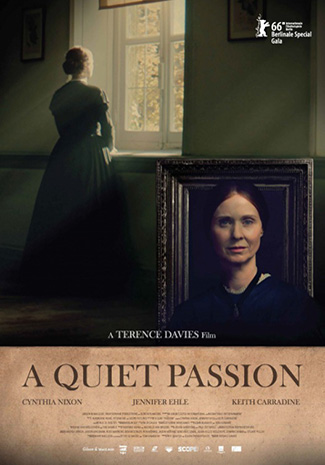