I didn’t think it was possible, but apparently one can squeeze blood from a turnip. The vegetable in this case is the “Final Destination” series. The blood, well, that is Final Destination 5, the fifth movie in this one-note franchise sure to once again raise the heartbeat of moviegoers keen on watching the young and hot die gruesome deaths.

And let me assure, there is no shortage of that. Starting this time — not on a bus or an airplane or at a race track or amusement park, but on a suspension bridge — the deaths come quickly. But not, however, to the “Lucky 8,” as they become affectionately known as. Molly (Emma Bell), Peter (Miles Fisher), Dennis (David Koechner), Candice (Ellen Wroe), Olivia (Jacqueline MacInnes Wood), Isaac (P.J. Byrne) and Nathan (Arlen Escarpeta) all make it off of the bridge intact thanks to the premonition of their friend and coworker Sam (Nicholas D’Agosto). Their luck is short-lived, as, in the order that they should have died, Death comes to reclaim them. One by one, in clever and ever devious ways (the trailers give several of them away — acupuncture mishap, gymnastics accident, LASIK overload — so I won’t spoil the additional surprises), the Grim Reaper takes what he(?) was robbed of.

Yes, Final Destination 5 sounds like a carbon copy of its predecessors but truth be told writer Eric Heisserer perks up the formulaic plot with a minor twist and an unexpected ending. With the help of mortician (Tony Todd, better known for being The Candyman in “Candyman”), the remaining survivors learn of a way to possibly get their names off of the hit list. This revelation isn’t anything not seen before in more interesting movies, but it is enough of a wrinkle to show some thought went into this installment (other than the new ways to have someone killed).

It would have been nice had Heisserer developed some characters that one could or would want to identify with. What is offered up is standard horror fare — good looking guy, hot chick, jerk-off, dumbass, etc. — and for the most part they’re all played with limited to no enthusiasm. I’m not sure whether director Steven Quale could have gotten more from his mostly unknown acting troupe and I’m not so certain he even tried. Quale, who doesn’t have a long glorified list of movies he’s helmed, gets a few good shots here and there but he mostly lets the movie plod along after the big staged bridge failure going from one accident to the next.

While Final Destination 5 is one of the better chapters in this 11 year old series (infinitely better than “The Final Destination“), there’s no escaping the fact you’ve seen it all before. Between this and the “Saw” series, I hope every wicked avenue for a person to be maimed and killed has been explored. Yet, I can’t help but feel future additions to these franchises will follow to prove me wrong. Ho hum. 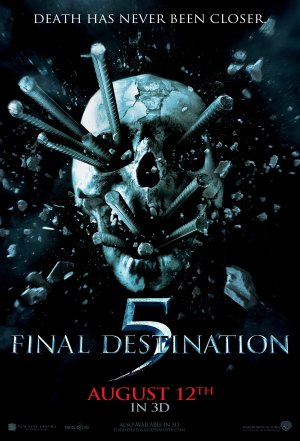