Admittedly, things are bound be lost in translation when watching an international film. Certain cultural nuances from any given nation can mystify another nation that has its very own set of cultural nuances; that’s just how the world works. Particularly with folklore and mythology, the complete lack of social and cultural context outside of the narrative can make certain moments seem absurd or downright bizarre.

For instance, Studio Ghibli’s animated children’s film, “Pom Poko,” may galvanize western audiences (and unsuspecting parents) when lovable little racoons begin magically transforming their testicles into numerous weapons and tools to help them defend their ecological system. Even if someone were to help explain why the racoons feel compelled to use their scrotum for construction and defense, it’s of little help because each of us has a fixed cultural background and learn to shape our understanding of the world through such a biased viewpoint.

This lack of understanding, however, does not excuse L.O.R.D.: Legend of Ravaging Dynasties.

The fantasy adventure blockbuster has been credited as the first fully CG animated film to come from China and it’s a complete disaster for a first attempt. Based on the novels by its director, Jingming Guo (who adapted and directed his series of novels, Tiny Times), L.O.R.D.: Legend of Ravaging Dynasties can only be described as an unfollowable mess of plot threads and twists which can physically hurt someone if they attempt to understand what’s going on.

Qi Ling (Cheney Chen, “Tiny Times” film series) works as a busboy when some suspicious guests, of which one professes to be a member of Noble Lords, bring havoc to the inn. Killed by a vicious creature which resembles a white lion with wings, Qi Ling is saved and resurrected by the Noble Lord named Silver Priest (Roy Wang of the popular Chinese boyband, TFBoys). Silver Priest tells the young man that he has chosen Qi Ling to become his disciple and successor as a Noble Lord, protectors of the Odin Mainland, because Qi Ling displays an inherent ability to control soul power. However, as Qi Ling trains under his duke’s pedagogy, a conflict between the seven Noble Lords grows deeper as they fight for control over soul power, and Qi Ling finds himself thrust into the middle of an epic battle between the seven soul masters.

Such an understanding of the film’s story can only be ascertained by looking up online synopses. While there are undoubtedly translation issues with English subtitles (Qi Ling being referred to primarily as “Chisling”), that doesn’t explain the profuse amount of inconsistencies between characters and scenes. Editing is atrocious, often showing characters teleport inexplicably between two distant locations and scenes, but it can’t wholly be blamed when working with an appallingly baffling screenplay. Trying to condense a novel into a feature-length running time can be difficult, that’s why omissions are often made with good reason. Jingming Guo, who also wrote the adapted screenplay, chooses to not remove superfluous details and yet simultaneously explains very little. What’s particularly fascinating is how flashbacks occur occasionally to earlier scenes, but with radical changes for the simple excuse to avoid plot holes in an already convoluted narrative. It becomes egregious during its climactic battle, when the supposed villains who everyone must fight against seem to change three times between fourteen characters. Motivations remain a mystery as well as the mythology in which L.O.R.D.: Legend of Ravaging Dynasties takes place is not understood. It never clearly gets explained who or what the Noble Lords are in relation to the country’s empire that seems to do much better without the Noble Lords’ involvement.

That’s not why L.O.R.D.: Legend of Ravaging Dynasties is remarkably bad though. There are certain ideas in the film’s fantasy which can’t be explained and leaves you wondering how it got away with some of the most inane writing imaginable. As Silver Priest explains, soul power is produced and emanates from every part of the body, but its source is at the buttocks. Yeah. So, to summon Qi Ling’s soul beast, the creature that killed the new disciple, Qi Ling must fart the soul beast into existence. For a film that takes itself and its world incredibly seriously, this plot element is even stranger than it sounds. Neither Jingming Guo or Original Force Animation choose to visualize this, so instead we see Qi Ling clench, fart, and then a giant white lion comes into existence from Qi Ling’s backside.

Imagine if Harry Potter’s magic stemmed from a similar orifice. Or if Gandalf chose to hold back the Balrog by blowing raspberries. Or any other fantasy that L.O.R.D.: Legend of Ravaging Dynasties liberally borrows elements from, imagine if flatulence was a crucial element to its rich world. How could anyone think it was a good idea?

While magic farts are not explained, the anus being a source of soul power, unbelievably, is explained through its on-the-nose subtext. Borrowing heavily from a romance style often seen in “yaoi” fiction, both Silver Priest and Qi Ling are paired emotionally as in a romantic relationship. It’s explained that the bond between a Duke and their Disciple makes them “both family and lovers simultaneously.” How we discover soul power’s source is through Silver Priest restraining himself and explaining that soul power will make Qi Ling “charmed” by Silver Priest’s aura. Silver Priest then strips to show off his body for both Qi Ling and the audience.

It’s certainly refreshing to see a non-heterosexual coupling in a big budget blockbuster, but their relationship never extends beyond heavily implied. Qi Ling is also paired with a young princess named Tianshu You Hua (Yun Lin, “The Mermaid”) and it seems intentionally unintentional that Tianshu is the most loathsome character in the film. Her egotism and snobbery inspires her to attempt murder on characters she simply doesn’t like, but she is supposed to be one of the heroes. Making her as insufferable as she is only retroactively makes the homoeroticism between Silver Priest and Qi Ling frustrating because their relationship never extends beyond teasingly suggestive. They even rip off the ending to “Brokeback Mountain” to add insult to injury.

For every terrible thing mentioned here that this film does, several more have been unacknowledged. While the animation can cross into the uncanny valley, it does have its beautiful moments (and that is the nicest thing that can be taken from viewing L.O.R.D.: Legend of Ravaging Dynasties). Even for the morbidly curious who enjoy strangely bad films, there’s little here on offer besides the odd magical summons. At best, the film can be seen as just a strange product from the burgeoning Chinese film market that — quite clearly — still has a lot of growing to do. 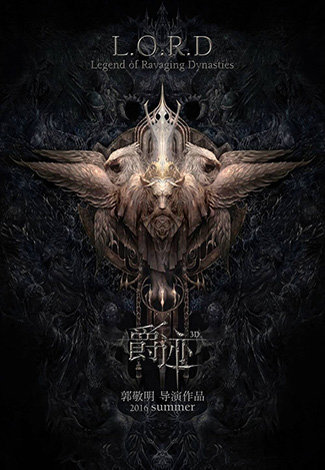