Catch 22: Based on the Unwritten Story by Seanie Sugrue is an intentionally reprehensible film of amorality that leaves a vile aftertaste before it’s even reached half of its runtime. For some, it’s a commonly unspoken rule that while critics purport a policy of impartiality to all their reviews, there is a slanted favor towards films from the indie scene. Even the unmistakably bad independent productions seem to get greater leniency simply because less money is involved. However, when a film is so repugnant to the eyes and ears that finishing the film is a challenge in itself, there is no easy way to say it. The film stinks, simple as.

But why? Admittedly, the first point of action being a toilet bowl’s point of view, filled with vomit and urine, and a man sticking his head in to add to the nasty cocktail certainly doesn’t help. Five guys, half of whom have done time in prison, are suffering from the aftermath of a heavy night of carousing and debauchery. Except as well as their terrible hangovers, Seanie (Michael Rabe) makes the discovery that there’s a dead woman in the bathroom. None of the men can quite remember who or where she came from, but what’s worse is that none of them can remember if they’re responsible for the murder. So, as Hurricane Sandy approaches their residence, the five friends take it upon themselves to get rid of the body by any means necessary.

Experimentation in cinema is a double-edged sword and when the deviation from convention doesn’t work, it becomes more excruciating to witness than if it had chosen the far simpler and duller approach. The second directed feature-length film by Josh Folan, Catch 22: Based on the Unwritten Story by Seanie Sugrue, still shows an amateurism that makes its story feel all the more juvenile as a result. There is a heavy abundance of jump cuts as each man tries to recollect the night before, an idea that sounds viable on paper, but feels obnoxious and flashy rather than relevant. Further frustrating is its clear “ironic” contempt for its influences. In typical Tarantino-like fashion, one character recounts the story of a dead man in a bar, but his friend interrupts and asks is there any purpose to the anecdote. This slight subversion promises to refute a style which had plagued American scripts for almost an entire decade, but then the next few minutes are spent finishing the story, undermining its own insolent critique.

Its attempts to present itself as unconventional are flaccid as are its gritty and unsanitary ambiance. However, far worse is the central premise itself. The film possesses a thematic core revolving around fraternity and masculine bonds that closely resembles David Fincher’s “Fight Club” if Fincher omitted the ironic deconstruction of toxic masculinity. As such, the casual manner with which it presents its dilemma of killing a woman seems intended for a black comical tone, but only makes its triviality seem grossly misjudged for comedic effect. There is nothing comedic about abuse and repeatedly showing different scenarios in which it is possible that each friend has killed her only exacerbates the lack of gravitas given to the central victim. It’s treated less like a crime and more of a nuisance for its horrible protagonists.

The breaking point comes from a jarring disconnect between the comedic mishaps of five men unsure how to cut up a body while the same woman is shown dying of a heroin overdose in visceral detail as her child cries in horror to what they witness. Catch 22: Based on the Unwritten Story by Seanie Sugrue becomes reprehensibly inept from there. There’s an incessant desperation to be taken seriously, to be treated as a creative talent, but the entire fiasco lacks the finesse and ingenuity to depict the dark material with any hope of being sensitive to its subject. If attempting to make a film that might be considered edgy, make absolutely certain that it is an audacious work and not just an exercise in being insufferable.

'Movie Review: Catch 22: Based on the Unwritten Story by Seanie Sugrue (2016)' has no comments 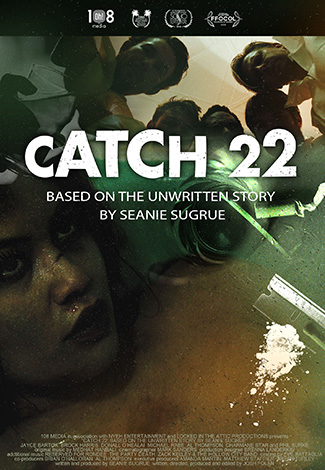