“I am convinced there will be mutual understanding among human beings . . . in spite of all the suffering, the blood, the broken glass” — Pablo Neruda, Memoirs

If the genre known as bio-pic has evolved into a predictable linear account of a well-known person’s life, Chilean director Pablo Larraín (“Jackie”) has turned the genre on its head in Neruda, his impressionist and surreal examination of one year in the life of the great Chilean poet Pablo Neruda. Written by Guillermo Calderón, the film continues Larraín’s exploration of recent Chilean history, following on the heels of “Tony Manero” (2008), “Post Mortem” (2010), and “No” (2012), works concerned with the effects of U.S.-backed dictator Augusto Pinochet. Neruda centers on the period 1948-49 after President González Videla (Alfredo Castro, “The Club”) banned communism from Chile and issued a warrant for Neruda’s arrest after he publicly protested the government’s imprisonment of Communist mine workers.

Winner of the Nobel Prize for Literature in 1971, Neruda, called “the greatest poet of the 20th century in any language” by author Gabriel Garcia Marquez, was a member of the Chilean Communist Party and served as a Senator as well as in several diplomatic posts. Luis Gnecco (“Much Ado About Nothing”) portrays Neruda as a corpulent middle-aged man full of contradictions — hero of the Communist working class and an admirer of Joseph Stalin, an outspoken enemy of the state and a man of exuberance and love of life, given to attending orgies, hanging out in brothels, and reciting his poetry to prostitutes and drag queens. In one telling scene, Neruda is dressed up as Lawrence of Arabia, reciting “Tonight I Can Write the Saddest Lines,” one of his most popular poems.

In the film’s flamboyant opening, attacks on Neruda by his colleagues in the Senate are delivered in a spacious Senate chamber which doubles as a men’s bathroom, suggesting that the rest of the film should not be taken literally. Referred to as “Emperor Caligula,” he is told that “Communists hate to work. They’d rather burn churches. It makes them feel alive,” Neruda defiantly fends off attacks. The film is narrated by a disembodied voice that we later learn is that of mustachioed police detective Óscar Peluchonneau (Gael García Bernal, “Rosewater”), the son of a prostitute, ordered by his superiors to apprehend Neruda and humiliate him. As the poet moves around with the assistance of Communist friends, he leaves behind pulp detective novels for Óscar to find, a mocking trail of clues that somehow forge an unspoken bond between the hunter and the hunted.

As it unfolds, Neruda is as much about the policeman as it is about Neruda, both of whose lives are linked by a dark and soulful poetry. Neruda’s wife, Delia del Carril (Mercedes Morán, “Love by Accident”), tells the inspector that he exists solely as a supporting character in one of Pablo’s stories: “He created you as the guard of an imaginary border. He thinks about you thinking about him.” This does not sit well with Óscar who pictures himself as a central character in the nation’s history, not playing a secondary role in a fictional story. Hidden for months in the basement of a house in Valparaiso, Pablo is turned back when he and his wife attempt to cross the border into Argentina because his name does not match the birth name on his passport, Ricardo Reyes Basoalto.

Protected by friends from the pursuing police, the couple is forced to move into a small apartment where Delia, a well-to-do Argentinean, complains about having to clean. When someone gives her rubber gloves; she asserts that, “hygiene is a bourgeois value.” Though confined under the watchful eye of Jara (Michael Silva, “Sudamerican Rockers” TV series), a Communist Party member who becomes one of Neruda’s primary handlers, Neruda still manages to sneak out to a brothel dressed as a priest and presents himself in drag at a later visit after Peluchonneau searches the premises in vain. To put events in context, Larraín shows us leftists being rounded up and sent to a prison camp run by a young military officer named Augusto Pinochet. There is also a memorable scene in which Neruda dresses in a white suit and hat pretending to be a Central American visitor.

Neruda shows his connection to ordinary Chileans as he hugs a street beggar and gives her his white jacket and also reassures a hotel maid that the revolution will end her long hours of hard work and low pay. The final phase of Neruda is the most revealing as Neruda attempts to escape from Chile on horseback over a mountain pass in the Andes near Maihue Lake into Argentina. Still being pursued on motorcycle by the determined, almost comical, police inspector, whose love-hate relationship with his prey has become obsessive, Neruda must call upon all of his inner resources to keep going to freedom. As Oscar’s motorcycle runs out of gas, the illusion that will die on the mountain is reborn as poetic truth. 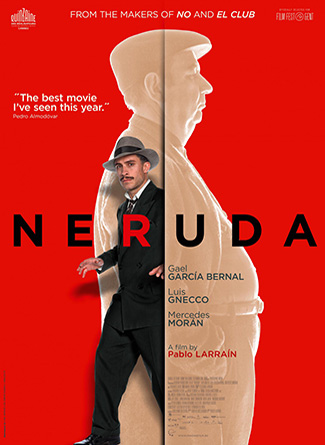