Life is all about taking risks. The decisions we make, no matter how big or how small they may seem, determines different outcomes we can’t always predict. Some of those moments will cause us to jump for joy in victory, while other moments will bring us to our knees in defeat. It shouldn’t surprise us why life is often compared to a game. Our reaction to the various obstacles we face showcases what type of player we are: One who quits or one who perseveres. In movies, the one who perseveres despite their circumstances is the one who has our heart. We as audience members identify with the classic underdog persona because we also face gigantic challenges in our own daily adventures.

In 2006, writing and directing duo Anna Boden and Ryan Fleck made a lot of noise in the indie scene with their debut feature film “Half Nelson.” As the movie’s acclaim with critics grew, it also transported its young rising star, Ryan Gosling, into the awards-worthy universe with his first Oscar nomination. Since then, Boden and Fleck would continue collaborating with each other, creating original material (with the exception of the adaptation for their 2010 film “It’s Kind of a Funny Story”) that is anchored in the cinematic storytelling structure of character studies. Now, this more Hollywood savvy duo returns with a “Non-Hollywood concoction” titled Mississippi Grind. As the film gets most of its juice from the actions of its characters and not its plot, there’s an expectation that whoever we watch onscreen must keep our attention and garner our sympathies. Boden and Fleck are shrewd enough to give not just one character to focus on, but two — Curtis played by longtime Hollywood heartthrob Ryan Reynolds (“Woman in Gold”) and Gerry, who’s played by Australian character actor sensation Ben Mendelsohn (“Black Sea”).

This unlikely (and contrived) combination seems to imply the movie’s hope for satisfying indie and mainstream audiences alike. But between the two men, Gerry is the more interesting one despite their distinguishable characteristics. Deep in debt, this struggling gambler teams up with Curtis, a charming poker player who wants to change Gerry’s fortune. Relentlessly haunted by his past, we can understand why Gerry became who he is now. However, with Curtis, the seemingly happy-go-lucky playboy, remains a narratively unsatisfying mystery. But Boden and Fleck get it right by making Gerry the heart of the story because he’s the only character in the movie who can invoke the most empathy.

Yet without Mendelsohn’s decent performance as a quietly reckless man, this isn’t a reality. It’s easy to assume that a buddy-road movie like this would bring fantastic hilarity and enjoyable hi-jinks galore — but not here. In every way, this is literally a “mellow-drama” and not near to something akin to a Judd Apatow comedy. Thoroughly made in a slow and dry fashion, Boden and Fleck’s storytelling style doesn’t necessarily mean it’s boring (although that language says it will be for some viewers). Ultimately, the narrative drags not because of its meandering sensibility, but surprising inability of having enough (or any) absorbing revelations within these characters to keep us riveted to the screen.

If you’re a fan of Boden and Fleck’s work, Mississippi Grind may satisfy your personal cinematic taste and in your judgment, they’ve probably hit the jackpot. While Gerry’s unluckiness is where the movie’s momentum lies, his story eventually presents low stakes that don’t deliver high rewards. This is where the movie appears to have a winning formula, but in actuality, it’s a misleading diversion. Sure, Gerry’s goal is to win big in every game he places a bet. But his relationship with Curtis is where he has more to lose. And since the movie is about two totally different people who bond, it misses the opportunity to explore more turbulence within the sea of friendship. It is the risk that Mississippi Grind takes and it ends up with less than what it was trying to make. 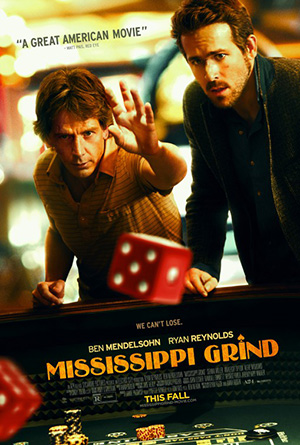