There are very few horror movie theater going trips that stick with me as incredible experiences. “Paranormal Activity” floored me with its outstanding ability to silence a packed theater, bringing to reality the idiom, “You could cut the tension with a knife.” The surprise ending of “Saw” thrilled me so much, I went to see it a second time in the theater — that very same night. Nothing tops being able to see “The Exorcist” on the big screen in re-release, and enduring my friend’s fingernails digging into my arm the entire time. And while I can now add my experience of seeing The Boy in the theater to this exclusive list, I cannot say it’s for the same reasons. The Boy is not a quality horror movie, but as someone who has seen a lot (A LOT) of bad horror movies, I can still say that it’s been a long time since I’ve had this much enjoyment watching a bad movie (that doesn’t have three silhouettes at the bottom of the screen).

Lauren Cohan of “The Walking Dead” fame, plays Greta Evans, a young American woman who arrives at a beautiful, haunting, Hill House-type home in England to serve as the new nanny for the Heelshire family. She is greeted by Mrs. Heelshire (Diana Hardcastle, “The Second Best Exotic Marigold Hotel”) who carries herself with prototypical English stature and Mr. Heelshire, (Jim Norton, “Jimmy’s Hall”) who seems like a kindly gentleman who lovingly caters to his wife’s demands. The older couple bring her into a library where she meets their son, Brahms. As you’ve already been told by the film’s trailers, Brahms is a porcelain doll that the Heelshires carry around the house, feed, and read to. Brahms loves poetry and listening to his music very loudly, Greta is told. She’s also given instructions about the house which require her to never throw away food and to regularly check the traps outside for rats and vermin. As her employers leave for their first vacation in years, they provide Greta with a list of rules for caring for Brahms, and Mrs. Heelshire tells her that if she’s good to Brahms, he will be good to her in return.

As she gets accustomed to her new role as nanny, Greta is kept company by Malcolm (Rupert Evans, “The Canal”), the man who delivers groceries once a week. Greta is, at first, completely unnerved by the doll, and keeps Brahms on a chair in his room, but after a series of unsettling events, she begins to follow Brahms’ rules — she dresses him, reads to him, and kisses him goodnight before he goes to sleep. She grows attached to Brahms, and takes her role as nanny very seriously; after all, as Mrs. Heelshire told her, he had gone through many nannies previously, and now he has chosen Greta to care for him. But, of course, there’s more to the story than that.

Without getting into spoilers, allow me to say that The Boy is one of the strangest horror films I’ve seen in a long time. The first half is your standard creepy doll movie — things disappear or move on their own when Greta isn’t looking, and Brahms’ empty glass eyes certainly serve their creepy little purpose. I don’t have an issue with scary dolls, so this didn’t have the effect on me that I expect it does on people who nurture that particular phobia, but I do get wrapped up in tales of the supernatural, so when bizarre things begin occurring, I was paying attention.

Director William Brent Bell and writer Stacey Menear have put together a movie that relies heavily on old standards like nightmares, dark and shadowy rooms (not to mention the attic), and backstories that include “odd” or “downright strange” children. They focus quite a bit on how playful Brahms is, and underscore the tension with descriptions of what the real Brahms was like. One of the more notable elements of the film is how quickly Greta changes in attitude towards Brahms; she turns on a dime from goofing on her role (feeling she’s taken advantage of the old couple) to lovingly carrying the doll around the house. Stranger still is how we, the audience, grow to share her allegiance to Brahms — no, really — and you’ll know exactly what scene I mean when you see it. The scenes that follow only grow stranger.

I’ve seen numerous movies to which I can compare The Boy, none of which I’ll name because there’s still enjoyment to be had from the reveal. Those unnamed movies, however, do, in part, what The Boy does and are much better at doing it. Nonetheless, my experience of seeing it with a crowd parallels some of my most fond memories of seeing well-made films in the theater. A woman approached me as the credits rolled and asked if I’d ever seen anything so creepy. I had to admit I definitely had — and did not consider The Boy to be creepy at all, though I’m glad it worked for her — but I did confess that I enjoyed one of the hardiest laughs I’ve had in a while.

I can’t say with a straight face that The Boy is a good horror movie, but I can definitely say I had a good time. Personally, I think that alone makes it worth a look. 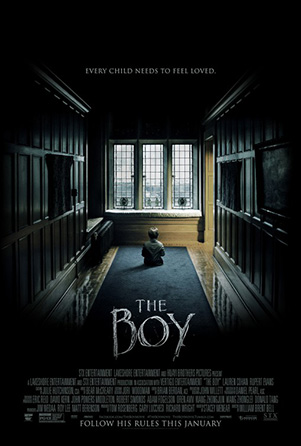