Pixar changed the game. They’ve set the standard for modern family-friendly entertainment as computer-generated animation that hypnotizes the eyes with artistic seduction while engaging the mind with thought-provoking themes. Any new family-oriented film that lacks the layers of imagination, innovation and intrigue, can be considered a waste of precious time. Sadly, Show Dogs falls into the worst-case scenario, missing all three layers with the addition of real animals with dubbed voices, which begs the question, “Why do movies like this still get made?”

Money, of course, but in this case, the answer lies with the film’s surprising corral of relatively bankable talent. In this live-action fiasco, Will Arnett (“Teenage Mutant Ninja Turtles: Out of the Shadows”) stars as Frank, a bumbling FBI agent who gets partnered with a street-wise Rottweiler named Max (voiced by rapper-turned decent actor Chris “Ludacris” Bridges, “The Fate of the Furious”). If you’re thinking, “Seriously? Now, that’s ludicrous,” you’re not alone. The movie cheekily makes a reference to that very fact (and more). With that self-awareness, it’s obvious it’s not taking itself too seriously. But that, unfortunately, doesn’t translate to amusing, charming or . . . particularly watchable.

With expectations low, Show Dogs continues to impress by aggressively lowering its standards. The Max and Frank dynamic is meant to invoke humorous mismatched buddy-cop franchises such as “48 Hrs.,” “Lethal Weapon,” “Rush Hour” or more fittingly “Turner & Hooch” and “K-9.” Heck, you can almost picture how this film was pitched: A large, chic office where excited filmmakers pace in front of eager studio executives. The writers (in this case Marc Hyman and Max Botkin) probably said something like, “In buddy cop movies, you usually put a white cop and a black cop together and crazy stuff happens. But in our movie, we’re putting a white cop and a black dog cop together. So, we’re doing something incredibly unique — we’re solving a different kind of racism! Our movie shows how humans and animals of differing cultures can work together and achieve world peace!”

Okay, the meeting probably wasn’t that silly or sophisticated.

Anyway, Max and Frank must travel to Las Vegas and find a stolen panda before it’s illegally sold and lost forever. To capture the thief, Max goes undercover to compete in a fictional prestigious dog show contest. Unfortunately, there’s one problem: Max has no grace, elegance or patience to win (sounds a bit like “Miss Congeniality,” doesn’t it?). Okay, he now has four problems. So, Max and Frank enlist the help of a former French dog champion turned pampered Pomeranian, Phillipe (voiced by Stanley Tucci, “Transformers: Age of Extinction”). Randomly, Max attracts a fan club of one, an annoying, desperate and lonely pug named Sprinkles (voiced by Gabriel Iglesias, “Magic Mike XXL”).

Max is so popular at the dog show, in fact, he manages to befriend, alienate and fall in love with a rough collie named Daisy (voiced by Jordin Sparks, “Left Behind”) in a matter of what feels like two minutes. He also gets some attention from a socialite pup named Persephone (voiced by RuPaul, “RuPaul’s Drag Race” TV series). Lucky dog, I guess . . .? Frank, on the other hand, meets his equivalent in Mattie Smith (Natasha Lyonne, “Antibirth”), a dog groomer sent to help the mismatched partners infiltrate the show. Lyonne is a decent enough actress, but the film has no idea how make her do anything interesting. Instead, the filmmakers have viewers asking super-duper thought-provoking questions like: “Is she a friend? A foe? A subtle love interest that isn’t a love interest? Or is she . . . all three in one?” But then again, every character in this movie has similar issues, so I guess the movie really has no issues after all.

But hey, inconsistencies and senselessness is the Hollywood way for kids movies and their old habits to die hard. Studios expect parents to come to theaters with their children, spend their hard-earned money and be satisfied with a weak product. The trailers say, “It has talking animals!,” “They’re super-cute and cuddly!,” “And did we mention . . . they . . . talk!” Selling points like these might have worked in the 80s and 90s, but today’s audiences are smarter than that. Sure, Show Dogs has a place to exist in the world — it’s just not in a movie theater. It needs to be in a much more exclusive place so those without a care can consume it. It’s called Redbox. 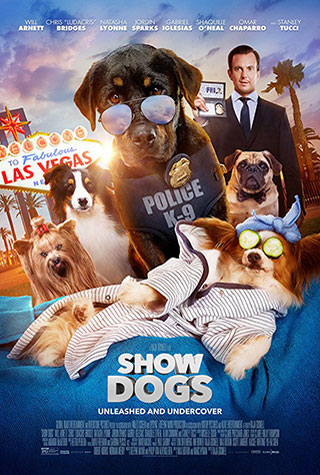